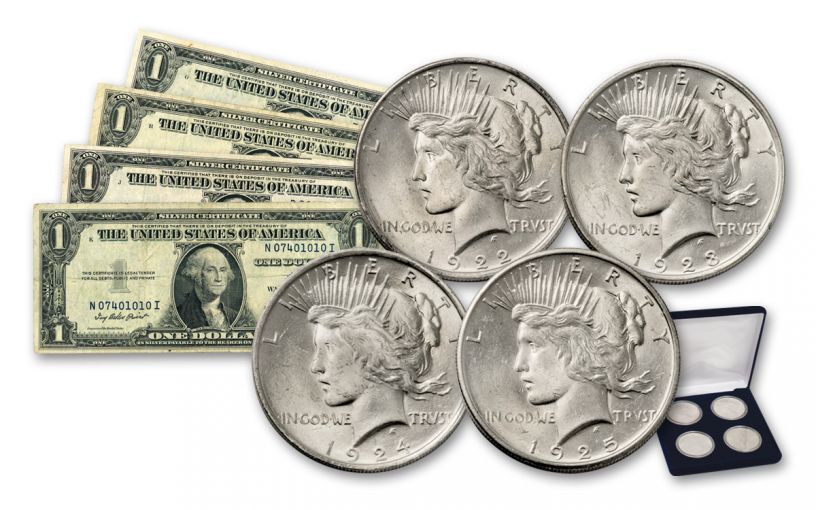 Availability: Available for Order
This item will ship 04/02/21
Item #
246698
CC Payments as low as
$124.50 / month
Add to Wish List Add to Wish List Wishlist is for registered customers. Please login or create an account to continue. Add to Compare

No Need to “Speak Easy” When You Order the Four-Coin Silver Dollar Set!

The term “Speakeasy” originated from the need to speak softly when discussing illegal night clubs in the Roaring Twenties – to keep the cops from finding out! Once inside, though, flappers pulled brand-new Peace Silver Dollars like these out of their purses to pay for a drink. With this set, you’ll receive four Peace Dollars struck between 1922 and 1925. Each comes in Brilliant Uncirculated (BU) condition, with the set housed in a deluxe presentation case.

You’ll also receive four 1935 $1 Silver Certificates – “hard money” that could have been traded at any bank for four Peace Silver Dollars. These Silver Certificates remained in circulation for nearly 30 years until 1963 when they were discontinued by an Act of Congress. 1935 was also the final year the U.S. Mint struck Peace Dollars, making Very Fine (VF) Silver Certificates of this particular date even more coveted.

No need to speak easy here – show that you really “know your onions” and reserve your Roaring Twenties set before our limited supply sells out!

One of the defining aspects of the Roaring ’20s was prohibition, a government ban on the manufacture, sale and transportation of liquor. Of course, no amount of legislation could transform all Americans into teetotalers. Instead, Prohibition simply drove alcohol consumption underground to illegal speakeasies. And with them went money like these Peace Silver Dollars. Click this set to your cart today!