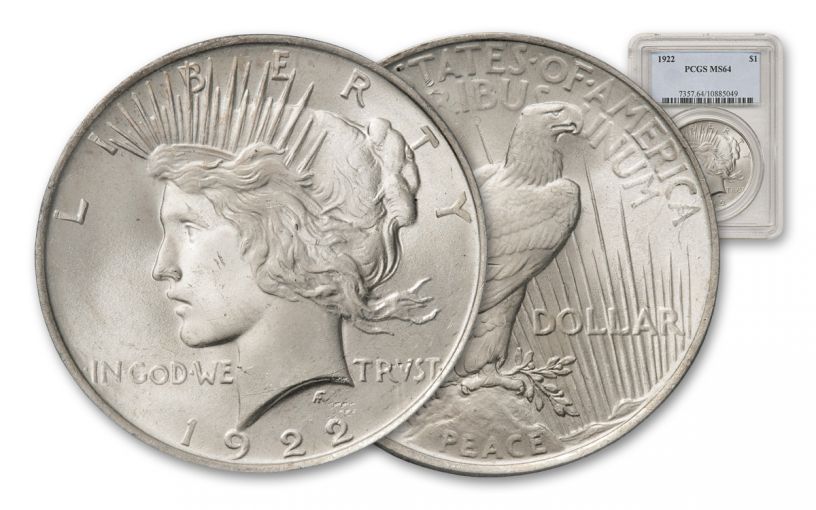 Availability: Out of Stock
This item is currently Out of Stock. Please sign up to be notified if this product becomes available.
Item #
223814
Add to Wish List Add to Wish List Wishlist is for registered customers. Please login or create an account to continue. Add to Compare
Product Description

Last Circulating Dollar was Designed by an Italian Immigrant!

They had a competition back in November of 1921. And an Italian immigrant won. The competition? To design the new silver dollar that would replace the Morgan Dollar. 33-year-old Anthony De Francisci beat out several of the better-known sculptors of the time and took home a $1,500 first-place prize with his spectacular Lady Liberty motif. He portrayed his wife, Teresa Cafarelli, as Lady Liberty wearing a crown of rays like that on the Statue of Liberty. To learn an immigrant designed one of the last circulating dollars says it all about what peace encompasses, both at that time so long ago, and still today: freedom, opportunity and the American dream.

At one point in the minting, there was a bit of a hitch. The coin's original reverse showed an eagle breaking a sword to symbolize disarmament at the end of the war. Mint officials were concerned this depiction would signify defeat, so assistant engraver George T. Morgan altered De Francisco's design at the final hour. The result was a beautiful symbol of peace for the ages!

What better coin to own than a sought-after silver dollar issued in honor of peace! It's rich symbolism every collector must own. Order your never-been-circulated, 1922-P Peace Dollar PCGS/NGC MS64 today and start telling its compelling story to friends and fellow collectors today!

FIRST LOW-RELIEF PEACE DOLLAR -- Struck in 1922, this Peace dollar was deemed, at the time, to be more practical than its 1921 predecessor. The 1921 version, you see, was struck in high relief as a "commemorative" coin. Because of this high relief, the1921 dollars caused problems on the coining presses and bankers complained they didn't stack properly. So, the engraver, George T. Morgan, was called in to modify the 1922 design in lower relief, but still with a beautiful luster.

SYMBOLISM IN GLEAMING SILVER -- Struck in fine 90% silver, these Peace Dollars are true American symbols of peace. Fascinated by the Statue of Liberty, the designer De Francisci's obverse presents Lady Liberty wearing a crown of rays, like that on the Statue of Liberty. The reverse features an eagle holding the olive branches of peace, rather than the typical olive branches and arrows of war.

CERTIFIED AND SEALED -- Each coin is in Brilliant Uncirculated condition and is graded MS64 by either the Numismatic Guaranty Corporation (NGC) or Professional Coin Grading Service (PCGS). Mint State-64 is a solid grade for this key date set, given the high demand for the coins. It will arrive in a protective, sonically-sealed case to enjoy for eternity.

LIMITED UNKNOWN MINTAGE – The number of remaining coins is significantly less than when they were issued, due to numerous melts of 1922 and 1923. Be sure to secure yours now, as this fine "peace" may never be available here again!