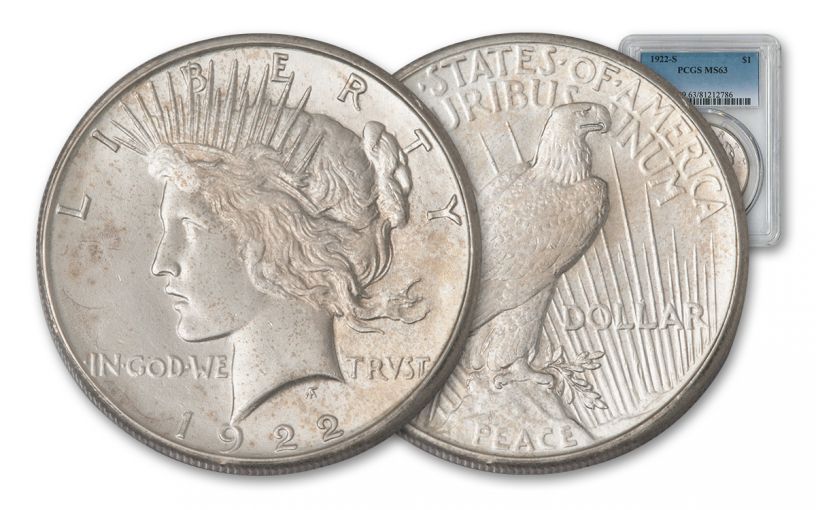 Availability: Out of Stock
This item is currently Out of Stock. Please sign up to be notified if this product becomes available.
Item #
271531
Add to Wish List Add to Wish List Wishlist is for registered customers. Please login or create an account to continue. Add to Compare

First is Always Better! The 1922 Low-Relief Peace Dollar That Began a Beloved Series.

The design of the Peace Dollar is iconic, appropriate for such an important coin. Its obverse features the head of Lady Liberty wearing a crown of rays modeled after the design of the Statue of Liberty. Imprinted on the obverse are "LIBERTY," "IN GOD WE TRUST," and the date 1922. The reverse features an eagle at rest clutching an olive branch before a rising sun, along with the inscriptions "UNITED STATES OF AMERICA," "E PLURIBUS UNUM" and the denomination "ONE DOLLAR," as well as the "S" mint mark, indicating it was minted at the San Francisco mint. Your beautiful Peace Dollar has been graded MS63 by Professional Coin Grading Service (PCGS), indicating you'll receive your coin in uncirculated condition with only a few marks that don't detract from its imagery or appeal. A small number of these coins are available through GovMint.com, and given that they represent the first year of the low-relief style, they are not expected to last long. Secure yours today to start or continue your Peace Dollar collection!