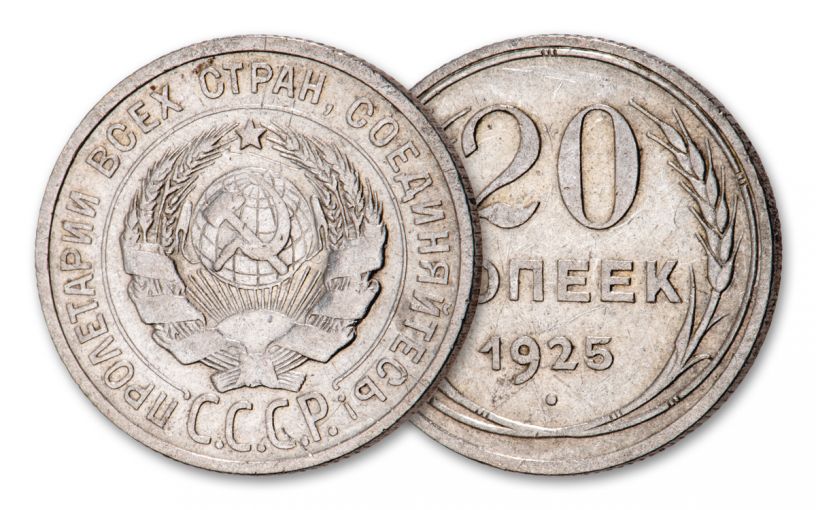 Availability: Available for Order
This item will ship 04/05/21
Item #
339722
Add to Wish List Add to Wish List Wishlist is for registered customers. Please login or create an account to continue. Add to Compare

There was a time when owning this coin could have cost you your life. Following the downfall of the last Russian Czar and his “White Army,” of loyalists, the communist “Reds” swept the nation, with Communist Party boss Joseph Stalin leading the charge. But all was not well. By 1930, the new Union of Soviet Socialist Republics (USSR), commonly known as the Soviet Union, was a financial mess. Stalin had a solution: He decreed that all silver currency would be replaced by coins made of base metals and ordered the all precious metal coins be confiscated from Soviet citizens. As you might imagine, this led to frightened citizens hoarding their precious 50% silver 20 Kopek coins.

Disappointed in the amount of silver being collected, Stalin wrote a letter instructing his henchmen to hold those in the Finance Ministry and Central Bank responsible by purging their ranks through systematic executions “including several dozen common cashiers.” Thus, this silver coin gained its bloody nickname. Struck between 1924 and 1931, your coin will arrive in circulated condition and come with an informative storycard that includes a certificate of authenticity detailing its bloody history.

Arguably the most prolific mass murderer in history, the man who would come to be known as Joseph Stain was born in 1878 as Ioseb Besarionis dze Jughashvili. Though his birth name remained his legal and registered name all his life, sometime during the early 1900s as he rose within the ranks of Bolshevik revolutionaries he adopted the nom de guerre “Stalin,” which literally means "man of steel.” In terms of physical stature, however, Stalin was anything but a man of steel. Standing a mere 5 feet 4 inches tall, Stalin‘s face was pockmarked due to contracting smallpox during childhood. He was born with a webbed left foot, and his left arm was permanently injured in a childhood accident that left it shorter than his right and made him unfit for military duty. Other children treated him very cruelly because of his stature and his deformities. Born in Georgia, which had been annexed by the Russian Empire, Stalin didn’t learn Russian until he was 8 or 9, and thereafter always spoke with a Georgian accent.

Your 20 Kopek coin is a remarkable window into the early days of Stalin’s dictatorial reign over the Soviet Union. The historically significant coin that circulated throughout Russia features the infamous hammer and sickle that would be the iconic symbol for Russian communism throughout most of the 20th Century. This coin is truly a fascinating piece from one of the most turbulent eras ever witnessed. Add it to your collection today! Date will vary