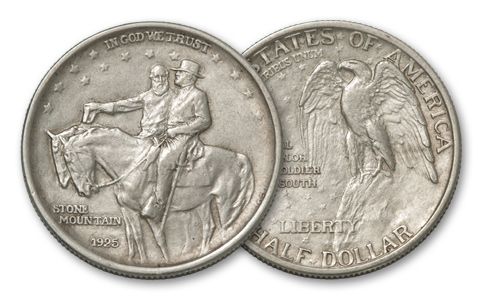 Availability: In Stock
This item will ship within 2 business days.
Item #
184792
Add to Wish List Add to Wish List Wishlist is for registered customers. Please login or create an account to continue. Add to Compare
Recommended Products
Product Description

Thanks to the decades-long passion of an intrepid southern collector, you can own a historic vintage siliver coin that's never before been available in quantities large enough to offer our customers-until now!

We have what could be the largest hoard of 1925 Civil War Commemorative Half Dollars ever assembled-the very first silver U.S. Coin to commemorate the War Between the States! These hard-to-find, high-demand coins capture legendary generals Stonewall Jackson and Robert E. Lee in the stunning detail of 90% silver. They were minted to raise money for the Stone Mountain Civil War memorial near Atlanta, where the image on this coin is now carved in bas relief. Each coin is a work of art.