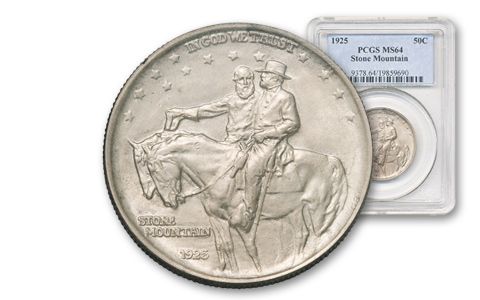 Before They Were Carved in Stone, They Were Struck in Silver

Located about a half-hour’s drive from Atlanta is a massive stone monolith. Surrounded by a state park, the gigantic rock abruptly juts from the ground and towers over the countryside. But what makes this isolated landmark famous is the stone carving on its north face. Featuring the images of three Confederate leaders of the Civil War: President Jefferson Davis and Generals Robert E. Lee and Thomas “Stonewall” Jackson, it is the largest bas relief sculpture in the world.

Originally designed by famed sculptor Gutzon Borglum before he took on the job of sculpting Mount Rushmore, work began on the massive project in 1925. The work was funded in no small part due to the efforts of the United States Mint at Philadelphia. The Mint struck more than 1.3 million of these 1925-P Stone Mountain Memorial Silver Half Dollars with funds received from their sales devoted to the expense of carving the figures. Not only was this the largest issue of commemorative coins by the United States up to that time, it was also the very first coin issued by the U.S. Mint to commemorate the Civil War!

The coin, regarded by many coin experts as one of the most popular U.S. Mint commemoratives ever issued, depicts Robert E. Lee and Stonewall Jackson discussing battle strategy astride their favorite horses, Traveller and Little Sorrel. Even though these coins were issued as commemoratives, many were circulated during the Great Depression or melted for their silver content in the years that soon followed. That means collector-worthy examples like those offered here, graded by the Numismatic Guaranty Corporation (NGC) or the Professional Coin Grading Service (PCGS) as being in impressive Choice Mint State-64 (MS64) condition, are particularly difficult to find.

Today's Civil War aficionados are hunting down these coins to add them to their collections. That's why we’ve snapped up as many graded by NGC and PCGS as we could find. Now is your chance to secure your piece of American history before they’re all gone! Grading service varies.