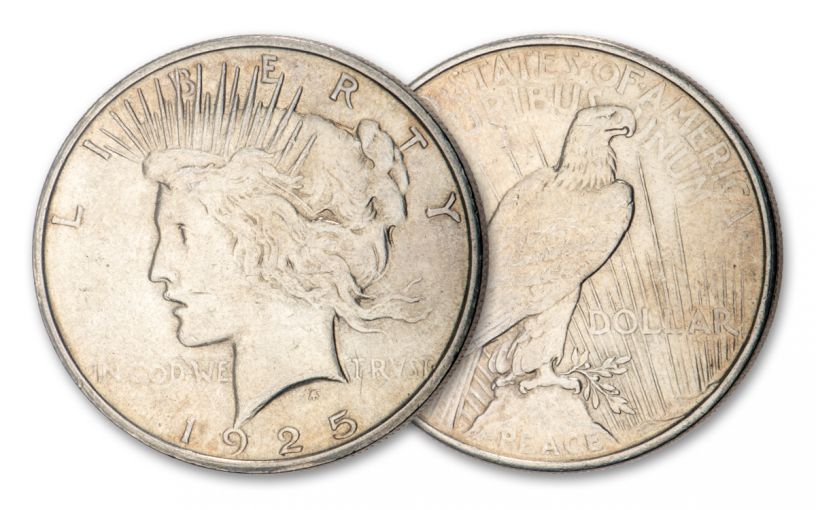 Availability: Available for Order
This item will ship 08/03/21
Item #
255125
Add to Wish List Add to Wish List Wishlist is for registered customers. Please login or create an account to continue. Add to Compare

The year was 1925 – the year Lon Chaney thrilled and terrified audiences as the titular character in Universal Studio’s The Phantom of the Opera. It was also the year Tennessee biology teacher John T. Scopes was arrested for teaching Charles Darwin’s Theory of Evolution, and the same year Mount Rushmore was dedicated in South Dakota. For coin collectors, it’s also a significant year for the scarcity of an especially key-date U.S. Peace Silver Dollar.

Collectors love to hunt down Peace Silver Dollars. The series was stuck for only 10 years (from 1921 to 1928 and again in 1934 and 1935), and three times fewer were struck compared to the total mintage of Morgan Silver Dollars. Then there’s the mint marks – of the total production of more than 190 million Peace Silver Dollars, only 27% bore the “S” mint mark of the San Francisco Mint. That number drops to just 14% when you look at Peace Dollars struck in 1925. So, what do all of these numbers mean? They mean that this 1925-S Peace Silver Dollar is a real prize, especially in Extremely Fine (XF) condition!

No one knows for sure how many historic Peace Silver Dollars still remain today, but it is certain that they are some of the most popular and widely collected American coins in the world. Don’t miss your chance to obtain a key-date coin from the fabulous often-overlooked series!

Get one of these key-date Peace Dollars struck at the San Francisco Mint. Each will come in Extremely Fine (XF) condition. Quantities are limited so order yours now!