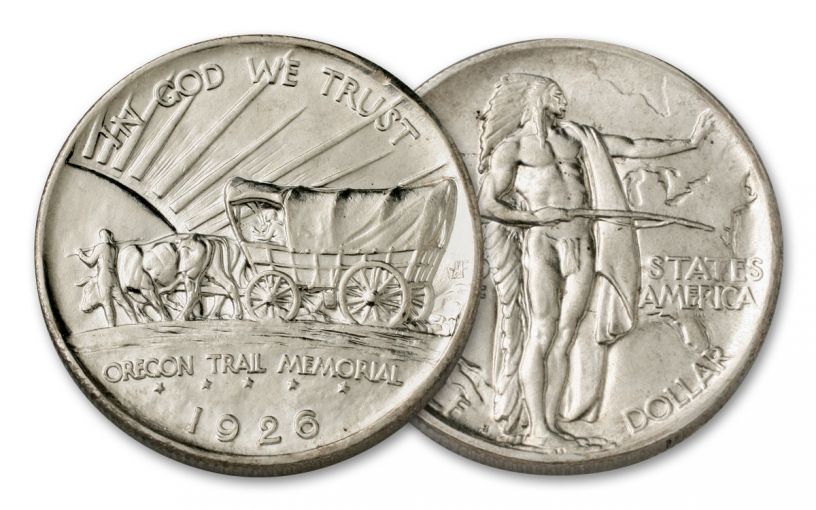 Availability: Out of Stock
Discontinued Product
Item #
223464
Add to Wish List Add to Wish List Wishlist is for registered customers. Please login or create an account to continue. Add to Compare

The concept of America’s Manifest Destiny was succinctly summed up in 1865 by the words of newspaper editor Horace Greeley who said simply, “Go West, young man!” Thousands of young men and women heeded his advice and made the arduous and often-dangerous journey, many upon the famous 2,000-mile highway of history known today as the Oregon Trail.

To pay tribute to the pioneers who traveled west on the Oregon Trail – many of whom lie buried along its path – the U.S. Mint struck a commemorative silver half dollar that is hailed today as one of the most interesting and perhaps most appealing of all the early commemoratives. Issued intermittently between 1926 and 1939, the Oregon Trail Memorial Silver Half Dollar was minted in 90% fine silver and is the result of a collaboration between noted sculptor James Earle Fraser and his wife, Laura Gardin Fraser, a highly respected artist in her own right.

The coin’s obverse as designed by Laura Fraser features a Native American with his left hand outstretched before him as if he were trying to stop the onslaught of pioneers heading west. An outline of the United States stretches across the coin in the background. James Fraser’s reverse design depicts the familiar image of a Conestoga wagon drawn by two oxen heading west towards the setting sun, symbolizing westward expansion.

The Oregon Trail Memorial Half Dollar went on to become one of the most extensively produced classic commemorative half dollars ever issued of the U.S. Mint. Authorized by the Act of May 17, 1926, Congress gave its approval for the striking of six million pieces – a huge number that was unprecedented at that time. Only around 265,000 were actually struck and more than 60,000 were later melted by the U.S. Treasury. All three mints – Philadelphia, Denver and San Francisco – struck the coin at different times over the next 13 years, making the Oregon Trail Memorial Half Dollar the first commemorative coin struck at multiple mints.

With just 203,102 of the coins available for today’s collectors, you’ll want to hitch your wagon to this coin and its authentic 1800s Old West themes. Don’t miss your chance to secure one of these bold and intricately designed Oregon Trail Memorial Silver Half Dollars. The ones we have available are all in nice About Uncirculated (AU) to Brilliant Uncirculated (BU) condition. Dates vary.

Hold America’s Manifest destiny in your hands with the 1926-1939 Oregon Trail Memorial Silver Half Dollar. Click one to your cart and chart your own path through our nation’s history!