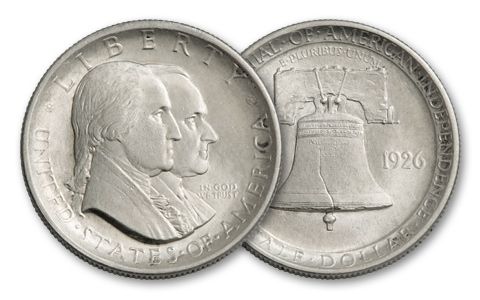 Availability: In Stock
This item will ship within 2 business days.
Item #
245243
Add to Wish List Add to Wish List Wishlist is for registered customers. Please login or create an account to continue. Add to Compare

150 Years of the American Experiment

Americans celebrated the events up to and including the Revolutionary War in the 1920s, just like we're celebrating the 150th anniversary of the Civil War today. Patriotic pageants were held, the post office issued special stamps, and the U.S. Mint struck special commemoratives coins like this 1926 Sesquicentennial Half Dollar. The Sesquicentennial (150th anniversary) of American Independence Silver Half Dollar was struck at the Philadelphia Mint and features Washington and Coolidge as well as the Liberty Bell. Because of the Great Depression in the 1930s, even these precious commemoratives were spent to survive, and few remain in About Uncirculated (AU) condition. Here's your chance to get one of these popular and historic coins!