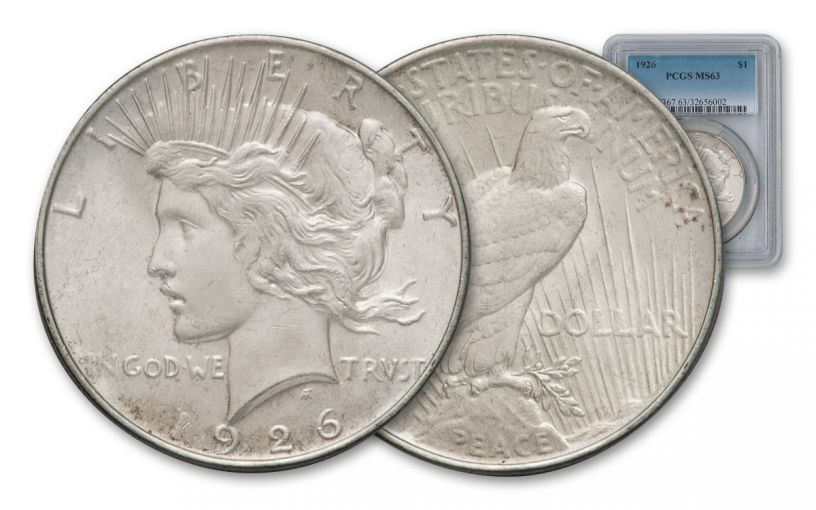 Availability: In Stock
Discontinued Product
Item #
228211
CC Payments as low as
$99.50 / month
Add to Wish List Add to Wish List Wishlist is for registered customers. Please login or create an account to continue. Add to Compare

Only the Almighty Knows How It Happened

Take any 1926-dated Peace Silver Dollar and examine it closely. The first thing that will strike you is that the word “God” in the motto IN GOD WE TRUST stands out prominently in distinct high relief. The difference is too great for it to be an accident and too obvious to be attributed to mere chance. Someone at the Philadelphia Mint clearly and deliberately reinforced the three letters of that one word on the master die for 1926. But why?

The accepted explanation is that during the summer of 1925 the nation’s attention was riveted on a small town in Dayton, Tennessee where teacher John T. Scopes was on trial for violating a law that forbade the teaching of Darwinian evolution. The so-called Scopes “Monkey” Trial ultimately became a heated debate between former Democratic presidential candidate William Jennings Bryan, testifying for the prosecution, and Clarence Darrow, serving as Scopes’ attorney. Even though Scopes was ultimately convicted, most journalists covering the trial concluded that Darrow humiliated Bryan and Scopes was sentenced to pay only a small fine. The controversial trial was later turned into a book, a play and a movie titled Inherit the Wind starring Spencer Tracy and Fredric March.

It appears that the trial also left its mark on the Peace Dollars produced at the U.S. Mint. The alleged story goes that while coverage of the explosive trial and its accompanying controversy raged in newspapers across the country, the Mint was just starting work on its dies for the 1926 silver dollar. It’s believed that U.S. Mint Chief Engraver John Sinnock purposely raised the word “God” on the coin’s motto, proclaiming his own belief on the subject.

Today, Sinnock’s 1926 enhanced Peace Dollar design with GOD in high relief is elusive and sought-after, but you have the chance to secure one graded by either the Numismatic Guaranty Corporation (NGC) or the Professional Coin Grading Service (PCGS) as being in Choice Uncirculated Mint State-63 (MS63) condition. Grading service varies. Order now!

The Peace Dollar was America’s last dollar series struck entirely in 90% fine silver. Don’t miss your chance to obtain a key-date coin that made its own mark on one of the most controversial events in American history.