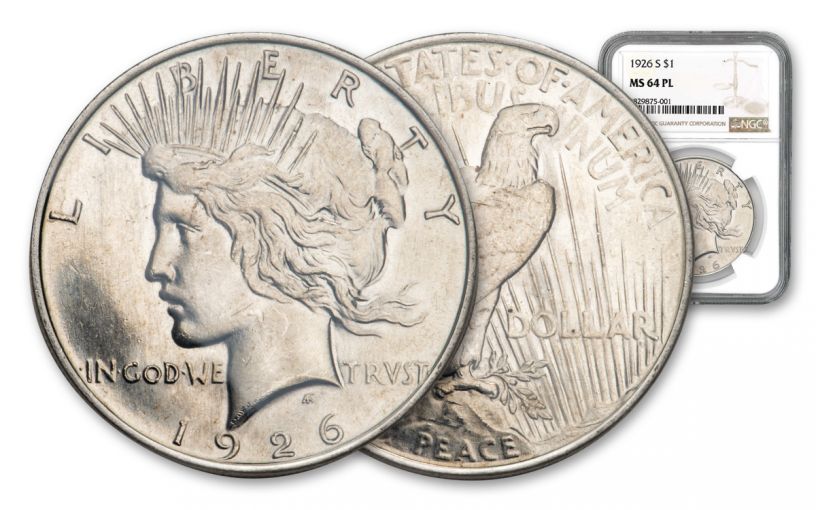 Availability: Call-In Only
This item is only available on a Call-In basis. Please call 1-800-510-6468 to speak to a representative.
Item #
351926
Add to Wish List Add to Wish List Wishlist is for registered customers. Please login or create an account to continue. Add to Compare

Just a few years after the end of World War I, a new silver dollar was introduced in the United States. Known as the Peace Dollar, it featured a magnificent profile of Liberty on the obverse and a sitting American Eagle on the reverse along with the word “Peace.” Beautifully designed by Italian-American sculptor Anthony de Francisci, the coin was America’s last circulating silver dollar struck in 90% silver.

These coins have been attracting a lot of steam from collectors in recent years with high-grade coins among their most popular targets. As with any coin series, scarcity is a huge factor, which leads us to this 1926 Peace Dollar struck at the San Francisco Mint. Of the 6.98 million Peace Dollars struck in 1926, only THREE have ever been graded in Proof-Like condition, with incredible strikes and blazing luster that put them just shy of a true Proof condition coin. That’s three coins out of nearly 7 million – and we have one of them ready for your collection!

This is a coin meant only for the elite silver dollar collector. It is a very rare coin and the second finest Proof-Like coin of its date known to exist. A world-class coin for a world-class collection. Join the upper echelon of coin collecting and reserve this coin today!

This amazing coin is a fantastic piece of numismatic excellence. Only a select few people will ever get a chance to make it a prized addition to their collection. Take the plunge and make it part of your collection before another collector grabs it before you do!