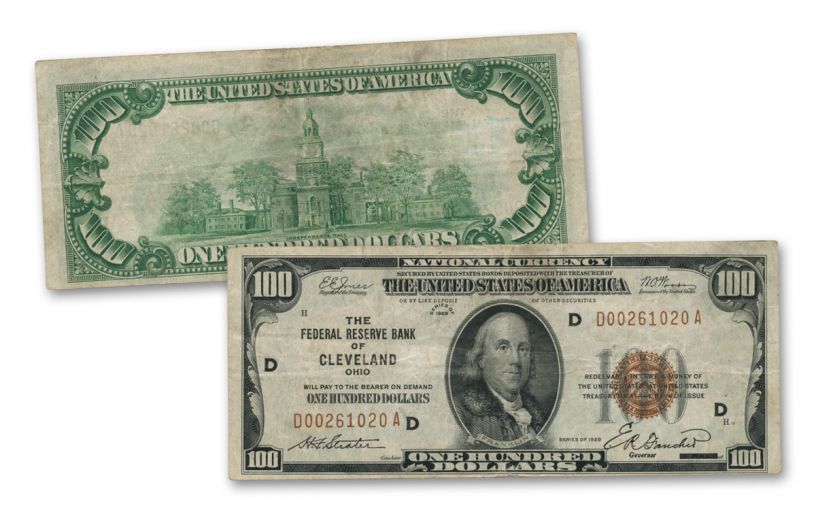 Availability: In Stock
This item will ship within 2 business days.
Item #
242522
CC Payments as low as
$147.50 / month
Add to Wish List Add to Wish List Wishlist is for registered customers. Please login or create an account to continue. Add to Compare

The stock market crash of 1929 was the worst decline in United States history and plunged America into the Great Depression, an economic downtown that would last another 10 years. At the height of the Depression, bank failures were all-too common and public hoarding of cash proved to be a major problem. In response, President Franklin D. Roosevelt closed all the banks for three days in early March of 1933 to stop a banking panic. The Treasury Department feared that once the banks reopened a mad dash for cash would suck all available bank notes out of the economy. To counter this threat, Federal Reserve Banks were authorized for a limited time to issue as many notes as they saw fit — essentially government-backed IOUs to keep the economy from collapsing!

These Federal Reserve National Bank Notes — known to currency collectors simply as “Nationals” – circulated heavily right away, and very few survive today. Their brown seals and serial numbers, and the Federal Reserve Bank branch prominently printed on the face make them instantly recognizable. After a long search, we’re pleased to offer this Series of 1929 $100 Federal Reserve National Bank Note. It measures 6.125" x 2.625" and features a portrait of Founding Father Benjamin Franklin on the front and an engraving of Philadelphia’s Independence Hall on the back. Each note available in this offer is in Fine (F) condition and comes in a protective sleeve.

We have only a limited number of these historic notes available. Don’t miss this opportunity to secure one of these scarce, collectible notes! Order yours today!