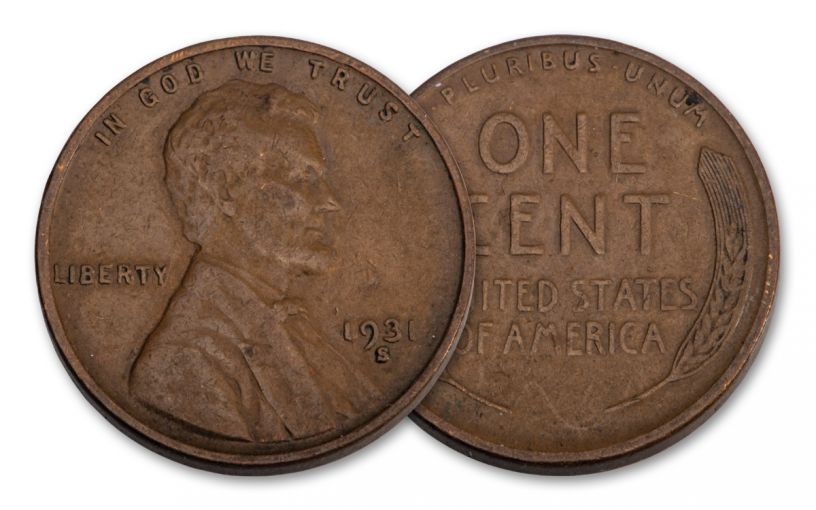 Availability: Available for Order
This item will ship 07/31/20
Item #
344393
Add to Wish List Add to Wish List Wishlist is for registered customers. Please login or create an account to continue. Add to Compare

A key date missing from many Lincoln Cent collections is the 1931-S, struck with a paltry mintage of just 866,000. While 866,000 may sound like a lot of pennies, compare that to the 24 million minted At the San Francisco Mint just a year earlier and you can see why this copper penny is in such high demand. In fact, in more than 110 years of production, this is the second-lowest mintage Lincoln Cent ever struck!

For the tens of thousands of people who collect Lincoln Cents, the 1931-S Lincoln Cent is by far one of the most difficult to find. For that reason alone, it’s unquestionably a key-date penny, but what also makes it so dear to collectors is that it would be four more years before the San Francisco Mint would strike another Wheat Penny! More importantly, it’s only the fourth cent in the small-cent era that began way back in 1857 to have a mintage of under one million! The only other coins in that group include the 1877 Indian Head Cent, the last-year 1909-S Indian Head Cent and the first-year 1909-S VDB Lincoln Cent.

In addition to sculptor Victor D. Brenner’s iconic design of President Abraham Lincoln on the obverse, the coin features the classic Wheat-Back Cent design on the reverse that was struck from the series’ introduction in 1909 until 1958. Look elsewhere, and you’ll find this coin selling for as much as $175. But while our limited supply lasts, you can secure this second-to-lowest mintage Lincoln Cent for less than $130 – a savings of more than $45. Each coin will arrive in Very Fine (VF) condition. A requirement for all Lincoln Cent collections!

Noted coin collector Batman once said, “Not all pennies are small.” Of course, the Caped Crusader was talking about the giant penny he keeps as a trophy in the Bat Cave. But there’s nothing small about this penny, either, and it’s one that’s sure to be a trophy in your collection. Click it to your cart today!