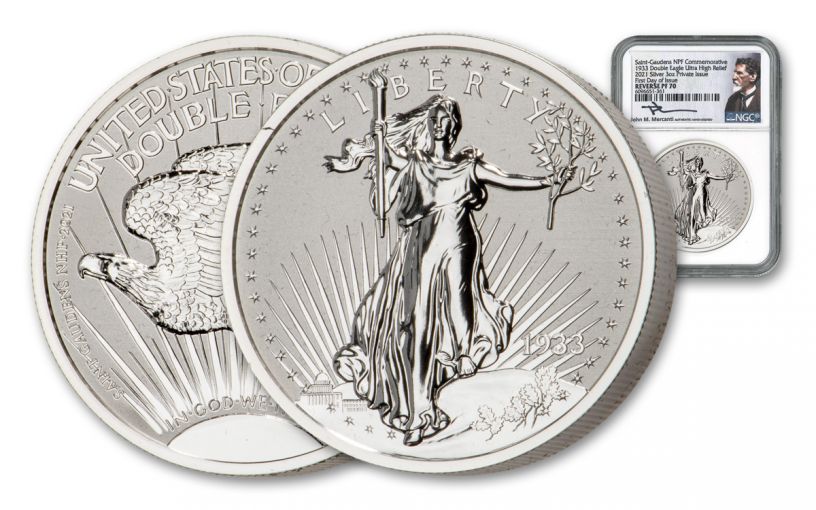 Availability: Call-In Only
This item is only available on a Call-In basis. Please call 1-800-510-6468 to speak to a representative.
Item #
409483
Add to Wish List Add to Wish List Wishlist is for registered customers. Please login or create an account to continue. Add to Compare
Recommended Products
Product Description

A Tribute To A Coin Whose Entire Run Was Destroyed

Due to changes made to currency laws during the Great Depression, all 445,500 of the United States 1933 Saint-Gaudens Gold $20 Double Eagle coins were ordered melted down and converted to bullion. But some coins escaped, one of which was sold for over $7.5 million to become the most valuable coin in the world! You probably can’t afford that stupendous price tag, and even if you could you’d have a hard timer prying away from its owner. But now you can own the next best thing — a stunning commemorative that faithfully recreates every beautiful nuance of the Saint-Gaudens Classic, hailed as the most beautiful U.S. coin ever struck!

The Most Beautiful American Coin Ever Struck

Though not a legal-tender coin, this commemorative medal is officially licensed by the National Park Foundation (NPF) in conjunction with the Saint-Gaudens National Historic Site. This momentous proof was struck in three full ounces of highly pure 99.9% fine silver and features the exact same designs American sculptor Augustus Saint-Gaudens created for the $20 Gold Double Eagle struck from 1908 to 1933. Saint-Gaudens completed the designs at the request of President Teddy Roosevelt, who wanted to improve the designs of America’s coins. Unfortunately, Saint-Gaudens died three months before production began and never saw his masterpiece completed. The design still reverberates among collectors to this day with its sumptuous image of Standing Liberty on the obverse and a Bald Eagle in flight n the reverse.

These designs really stand out on this medal thanks to its Ultra High Relief (UHR) detail that gives the commemorative an almost three-dimensional appearance. And, as if that weren’t enough, it was struck as a Reverse Proof. The opposite of a regular Proof that features frosted details rising over mirror-like fields, a Reverse Proof boasts mirror-like details rising over frosted fields! Furthermore, this piece contains a satin finish, a soft effect found in small details, that was selectively used to add another visual layer for an overall result that’s simply stunning!

Perfect Proof Condition From Among the First Issued

In fact, each 1933–2021 National Park Foundation Three-Ounce Silver Saint-Gaudens Double Eagle Reverse Proof available here has been graded by the Numismatic Guaranty Corporation (NGC) as being in flawless Proof-70 (PF70) condition, a distinction that means your perfectly-graded proof will have ZERO imperfections — showing all features and fields exactly as the engraver and mint intended. What’s more, NGC has further pedigreed this proof with a First Day of Issue (FDI) certification, a designation that means it was received by NGC or an NGC-approved depository by the release date or on the business day within 24 hours of the official release date!

Crafted From Original Plasters and Signed by a Living Coin Legend

As a final touch, each coin has been sonically sealed in an acrylic holder and encapsulated with a label personally signed by John Mercanti. The retired 12th Chief Engraver of the U.S. Mint, Mercanti and a team of artists at the Commonwealth Mint used the original 1907 Augustus Saint-Gaudens Plasters held by the Saint-Gaudens National Historical Park, as well as detailed images of the existing 1933 Saint-Gaudens Double Eagles, to carefully recreate the designs on this, the most iconic of iconic U.S. coins.

Just 1,933 of these 1933–2021 National Park Foundation Three-Ounce Silver Saint-Gaudens Double Eagle Reverse Proofs are available for worldwide release and each one available here will come beautifully housed in a premium wooden display case and accompanied by a Certificate of Authenticity.

Don’t miss your chance to get this 1933–2021 National Park Foundation Three-Ounce Silver Saint-Gaudens Double Eagle Reverse Proof! With just 1,933 minted, you should reserve yours now while there’s still time!