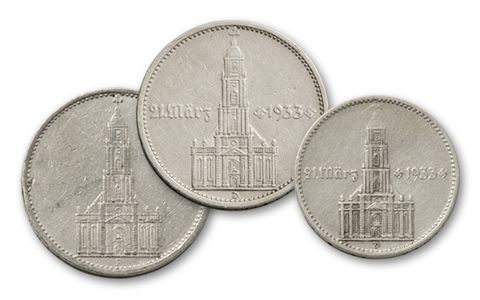 Availability: Out of Stock
This item is currently Out of Stock. Please sign up to be notified if this product becomes available.
Item #
245176
Add to Wish List Add to Wish List Wishlist is for registered customers. Please login or create an account to continue. Add to Compare
Product Description

In 1933, a handshake between Hitler and Paul von Hindenburg at the Potsdam Church started the Nazi reign of terror. The Nazi reign also ended at Potsdam, at a Conference in 1945, where Truman, Churchill and Stalin met to decide the future of Germany. This 1934-1935 German Silver 3-Piece Set was issued to commemorate the first anniversary of the Nazi takeover, and features a stark image of the church on a 2-Mark, and two 5-Mark coins. In addition, one of the 5-Mark coins includes the date March 21, 1933 - the one year anniversary of Hitler's rise to power. These silver commemoratives were highly collectible then - and they still are today - both in Europe and in the United States. The coins are struck in 8 and 13.88 grams of silver and are in Fine condition. Hurry for yours, our supplies are limited.