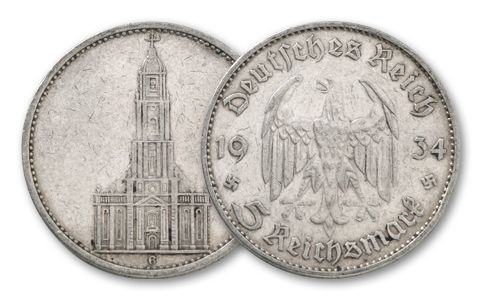 Availability: In Stock
Discontinued Product
Item #
222434
Add to Wish List Add to Wish List Wishlist is for registered customers. Please login or create an account to continue. Add to Compare

Initially, this stately silver coin was intended to be released in 1934 to commemorate the 200th anniversary of the Potsdam Garrison Church, an impressive structure built during the reign of Prussian King Friedrich Wilhelm I in the 1730s. The plans for the coin had been in the works long before Adolf Hitler and his Nazi Party assumed control over Germany. But, by the time the coin was finally minted, the Nazis had been in power for almost a year. Never one to miss a chance to spread Nazi ideologue, Hitler turned the coin into a first anniversary celebration of Nazi rule.

While the coin’s reverse features the front of the historic Potsdam Garrison Church, it’s the obverse where it shows its true colors in the form a Nazi German Eagle flanked by a pair of dreaded swastikas. A further message of Nazi propaganda was added to the coin’s edge where an inscription reads GEMEINNUTZ GEHT VOR EIGENNUTZ, German for “Common good takes priority over self-interest.”

Located just southwest of Berlin, the church was an elegant baroque structure long patronized by Germany’s Protestant Kaisers, kings and generals. It was there on March 21, 1933 – the Nazi’s self-proclaimed “Potsdam Day” – that Adolf Hitler reconvened the new parliament after the notorious Reichstag fire the previous month. Reich President Paul von Hindenburg, resplendently dressed in his general’s uniform complete with a spiked helmet, shook Hitler’s hand in a ceremony that dramatically represented the transfer of power from the Weimar Republic to the single-party state led by Der Führer – The Leader – Adolf Hitler.

With a denomination of 5 Reichsmarks, this was the largest denomination silver coin ever struck by the Third Reich. Interestingly, the church was destroyed by fire on April 14, 1945 just two weeks before Hitler committed suicide. Bringing the legacy of the church full circle, Potsdam was also the city where Allied leaders met from July 17 to August 2, 1945 to decide the fate of Germany following the end of World War II in Europe.

By the time the Potsdam Conference got underway – and for many years after – anything bearing Nazi symbols was destroyed, a fact that only adds to the scarcity of these coins. Fortunately for you, the coins we have available were saved from destruction and represent a pivotal moment in world history that you can own and pass down for generations to come. Each comes in Very Fine (VF) condition with lots of nice detail.

Meant to celebrate the 200th anniversary of the Potsdam Garrison Church, Hitler turned this 1934-1935 Germany 5 Reichsmark Silver Potsdam Church coin into a tribute to Nazi rule. Don’t wait to grab this important piece of history, click it to your cart right now!