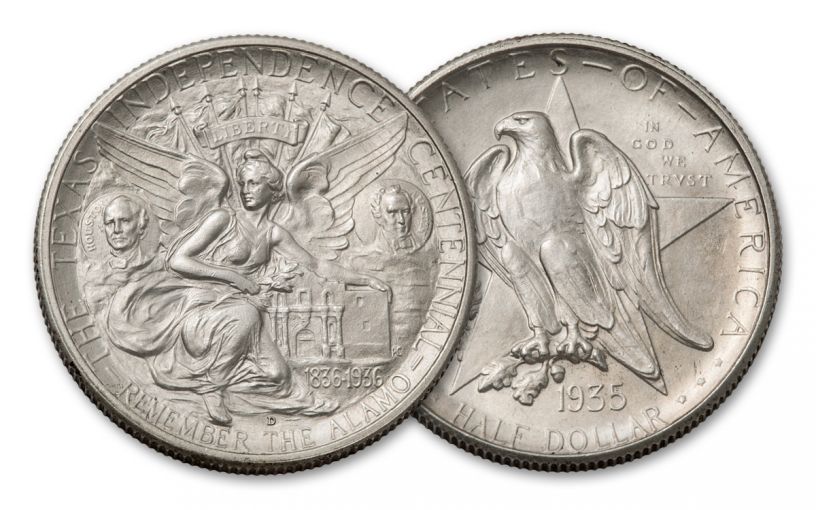 Availability: In Stock
This item will ship within 2 business days.
Item #
184444
CC Payments as low as
$124.98 / month
Add to Wish List Add to Wish List Wishlist is for registered customers. Please login or create an account to continue. Add to Compare

Remembering the Alamo and the Birth of Texas

As Mexican troops led by General Antonio López de Santa Anna took an afternoon siesta near San Jacinto, Texas on April 21, 1836, they were startled awake by a mob of howling Texans charging at them shouting, “Remember the Alamo!” Though outnumbered 2-1, General Sam Houston’s army overwhelmed Santa Anna’s troops and claimed victory in the Texas Revolution’s climatic battle. The fight lasted just 18 minutes, and in addition to routing the Mexican forces, the Texans also captured old Santa Anna himself, who soon signed an agreement that paved the way for the Republic of Texas to become an independent country.

Nearly a century later, the U.S. Mint struck these gorgeous silver half dollars to commemorate the Centennial of Texas Independence. But, like everything in Texas, this coin seems almost larger than life and wasn’t issued for just one year, but for FIVE years from 1934-1938 on behalf of the American Legion Texas Centennial Committee.

Struck in 90% fine silver, the coin features one of the most ornate designs ever seen on a U.S. coin, squeezing in images of a kneeling Winged Goddess of Victory spreading her wings over the Alamo, the six flags of Texas and portraits of Sam Houston & Stephen Austin. The words REMEMBER THE ALAMO are engraved on the bottom of the design while THE TEXAS INDEPENDENCE CENTENNIAL is at the top. The coin’s reverse is no less impressive and is unusual for the fact that it features an Eagle on the obverse rather than the reverse. Behind the Eagle is the large five-pointed star of Texas.

A total of 304,181 coins were minted between the Philadelphia, Denver and San Francisco Mints. Unfortunately, more than half of this coin’s original mintage down by the U.S. Treasury, leaving just 149,661 for today’s collectors. Don’t miss your chance to secure one of these bold and intricately designed Texas Independence Centennial Commemorative Silver Half Dollars. The ones we have available are all in nice About Uncirculated (AU) to Brilliant Uncirculated (BU) condition. Dates vary.

Don’t mess with Texas – and don’t mess around when it comes to this coin. Secure your 1934-1938 Texas Independence Centennial Commemorative Silver Half Dollar now!