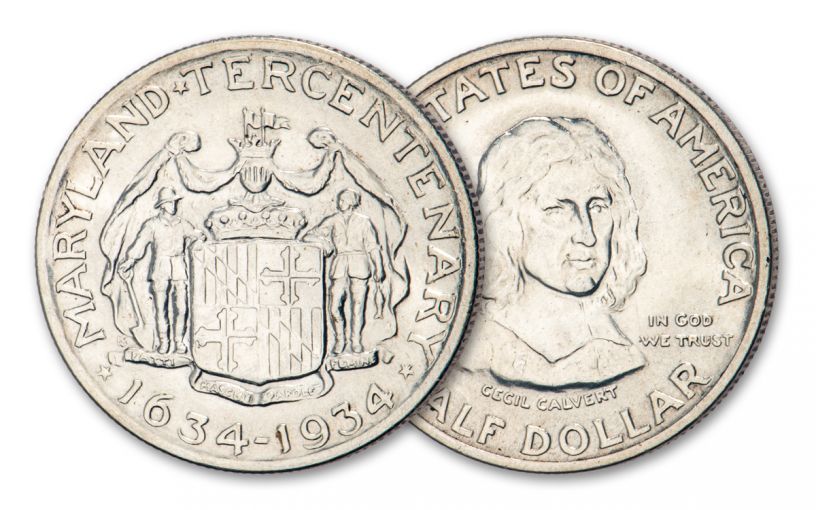 Availability: Out of Stock
This item is currently Out of Stock. Please sign up to be notified if this product becomes available.
Item #
353433
Add to Wish List Add to Wish List Wishlist is for registered customers. Please login or create an account to continue. Add to Compare

How Baltimore and Maryland Got Their Names

The first English colonists to settle in what would later become the state of Maryland arrived in 1634 under a charter granted by King Charles I to the family of Lord Baltimore Cecil Calvert. Calvert, who never set foot in the New World, named the new province “Terra Maria,” or “Maryland” in honor of the king’s wife, Queen Henrietta Maria. To celebrate its tercentenary in 1934, Maryland released this special one-year-only silver half dollar that bears a portrait of Lord Baltimore.

Struck in 90% silver, the coin was designed by Hans Schuler and featured the facing head of Lord Baltimore on the obverse and the Maryland Coat of Arms on the reverse – a design based on the heraldic banner of the Calvert family. Just 25,015 of these coins were ever struck and were initially sold for $1 apiece to help finance the 300th anniversary celebration in Baltimore.

Though initially founded as a Catholic settlement, Maryland was the first English colony in North America that passed laws promoting religious toleration. The Calverts were an old Irish family and these laws were thought to have been Lord Baltimore’s not-so-subtle message to the Church of England that Catholics and Protestants could live harmoniously together.

Now you can secure this popular collector coin for your collection. Each coin available in this offer comes in Brilliant Uncirculated (BU) condition with some original mint luster and only slight overall wear. This is a fantastic condition after surviving more than 85 years since they were first offered to the public!

The 1934-P Maryland Tercentenary Commemorative Silver Half-Dollar is one of America’s most popular commemoratives. Don’t miss your chance to get this beautiful-yet scarce coin. Click it to your cart today!