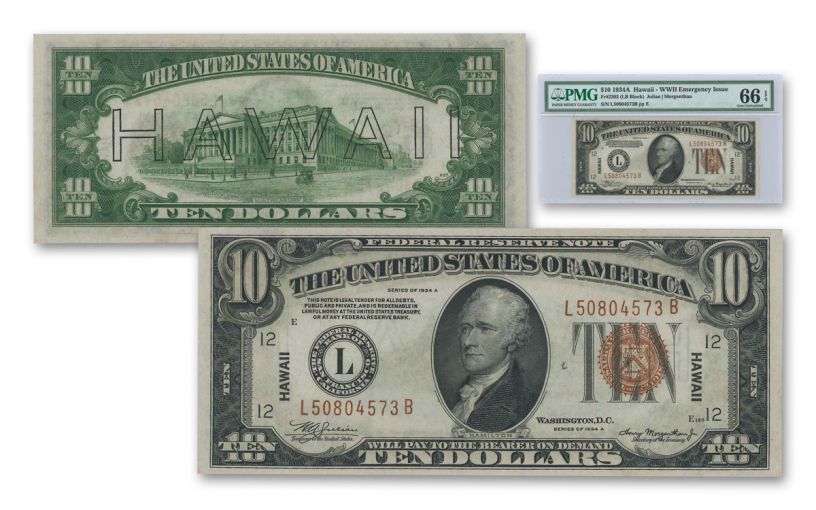 Availability: In Stock
This item will ship within 2 business days.
Item #
288594
CC Payments as low as
$498.75 / month
Add to Wish List Add to Wish List Wishlist is for registered customers. Please login or create an account to continue. Add to Compare

Remember the Pearl Harbor Attack That Happened Over 75 Years Ago With Some of the First Hawaii Notes!

Collectors and history fans alike will love these 1934 $10 Federal Reserve Hawaii Notes. Following the Japanese attack on Pearl Harbor on December 7th, 1941, 1934-1935 Federal Reserve notes were overprinted with the word “Hawaii” on both sides and issued on the Hawaiian Islands in 1942 in fear that the Japanese military would invade the islands. Each 1934-A $10 Federal Reserve Note Hawaii received a grade of 66EPQ by Paper Money Guaranty (PMG) with outstanding paper quality. Also, each note is Friedberg 2303 and has a brown seal and the signatures of Julian and Morgenthau.

While the events that took place at Pearl Harbor, Hawaii on December 7th 1941 will be rightfully remembered in history books as one of the tragic events in American history, this event forced us into World War II where the United States triumphed over some of the world’s cruelest empires and dictators. Don’t miss a chance to get a rare bank note connected with one of the major events in American history! Order your 1934 $10 Hawaii Federal Reserve Note today!