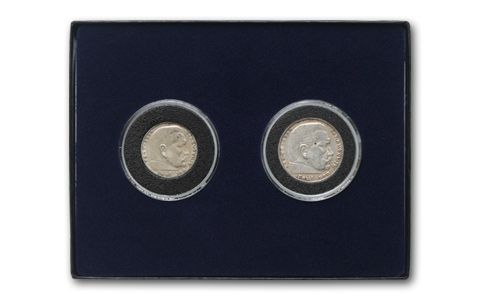 Availability: Out of Stock
This item is currently Out of Stock. Please sign up to be notified if this product becomes available.
Item #
221859
Add to Wish List Add to Wish List Wishlist is for registered customers. Please login or create an account to continue. Add to Compare
Product Description

This two-coin set features a 2 and 5 Reichsmark issued in Nazi Germany between 1936 and 1939. When the Nazi party came to power in Germany in 1933, it immediately set out to galvanize public support by using popular German figureheads like Paul von Hindenburg and powerful images such as the German Eagle and Nazi swastika on public buildings, in newspapers and on the coins Germans used every day. When Nazi Germany was defeated by the Allies in 1945, anything bearing Nazi symbols was confiscated and destroyed. What few silver Reichsmarks survived are now scarce WWII relics.