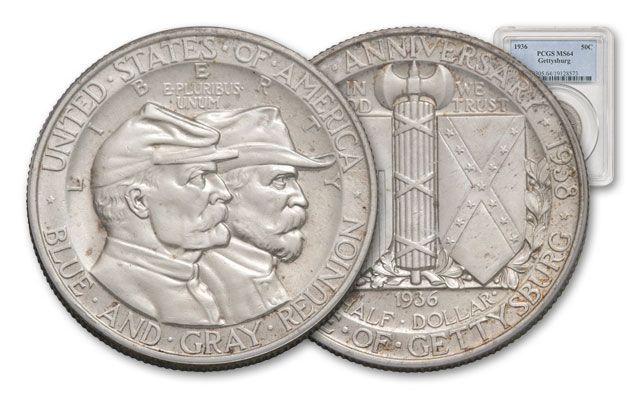 Availability: Out of Stock
This item is currently Out of Stock. Please sign up to be notified if this product becomes available.
Item #
222214
Add to Wish List Add to Wish List Wishlist is for registered customers. Please login or create an account to continue. Add to Compare

2015 marks the 150th anniversary of the end of the Civil War. It's a fitting time to acquire this commemorative struck 75 years ago. This half dollar coin was struck in 1936, two years before the 75th anniversary of Gettysburg, the most pivotal of the Civil War battles. Veteran James Sankey of Pennsylvania, donned his old cap at the age of 90 to model for this half dollar design. His face was used to represent the Union and Confederate soldiers on the obverse.

Sankey was never injured during his service, but ironically later in life was hit by a car five times and broke his arm reaching for a streetcar. Each half dollar was struck in 12.50 grams of 90% fine silver and depicts the Union and C.S.A. shield on the reverse. Yours will come graded in Mint State-64 condition graded by Numismatic Guaranty Corporation (NGC) or Professional Coin Grading Service (PCGS). Just a little shy of 27,000 were struck. Don't delay. Seize this Civil War commemorative before the last of them disappear. Grading service varies.