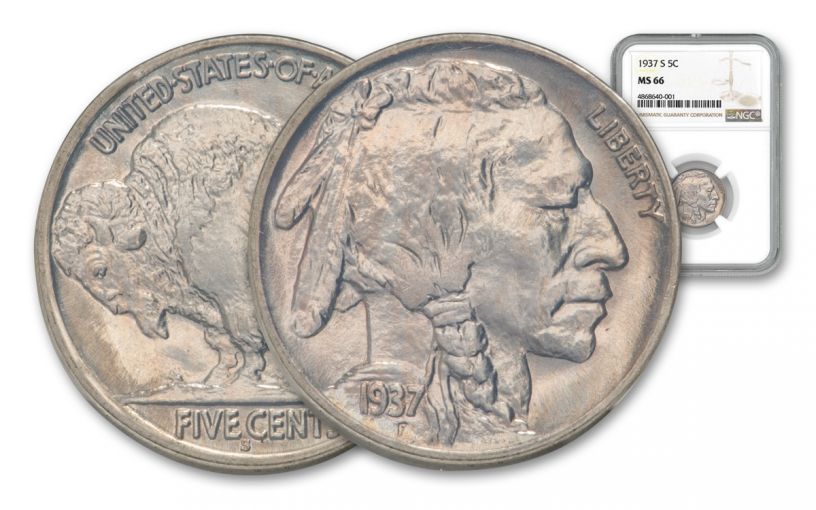 Availability: Out of Stock
This item is currently Out of Stock. Please sign up to be notified if this product becomes available.
Item #
354775
Add to Wish List Add to Wish List Wishlist is for registered customers. Please login or create an account to continue. Add to Compare

The famous Buffalo Nickel series was struck from 1913 until 1938. That final year also saw the release of the Jefferson Nickel – meaning the year prior also saw reduced Buffalo Nickel mintages. 1937 was the final year the Philadelphia Mint struck the coin, and production was extremely limited at the San Francisco Mint. Of the 102 million Buffalo Nickels struck by the U.S. Mint in 1937, just 5% were struck at San Francisco!

In this offer we’re making available 1937-S Buffalo Nickels certified and graded by either the Numismatic Guaranty Corporation (NGC)or the Professional Coin Grading Service (PCGS) as being in wonderful Gem Uncirculated Mint State-66 (MS66) condition – a remarkable grade considering coins like this circulated heavily after they were issued more than 80 years ago! Even more remarkable is the fact that current population reports state that only 94 Buffalo Nickels struck at the San Francisco Mint in 1937 are graded in higher condition!

Created by famed American sculptor James Earle Fraser, the Buffalo Nickel was popular throughout its run thanks to its uniquely and unequivocally American designs. The Indian depicted on the coin is a dead ringer for Oglala Lakota Chief Iron Tail – though Fraser claimed it was a composite of three men in order to protect both the Chief’s privacy and his own artistic license. The American bison on the reverse was directly related to the obverse design as buffalos were an important symbol for many Native Americans. The buffalo was modeled after Black Diamond, a large American bison then on display at the Bronx Zoo in New York City not far from Fraser’s studio.

Don’t miss out on these fine examples of this date and mint mark! Click the low-mintage 1937-S Buffalo Nickel to your cart now before they disappear!

Here’s your chance to go on an epic “Buffalo Hunt” for one of America’s most coveted coins – all without having to leave the comfort and safety of your home or office! Make this low-mintage 1937-S Buffalo Nickel a key addition to your personal collection today!