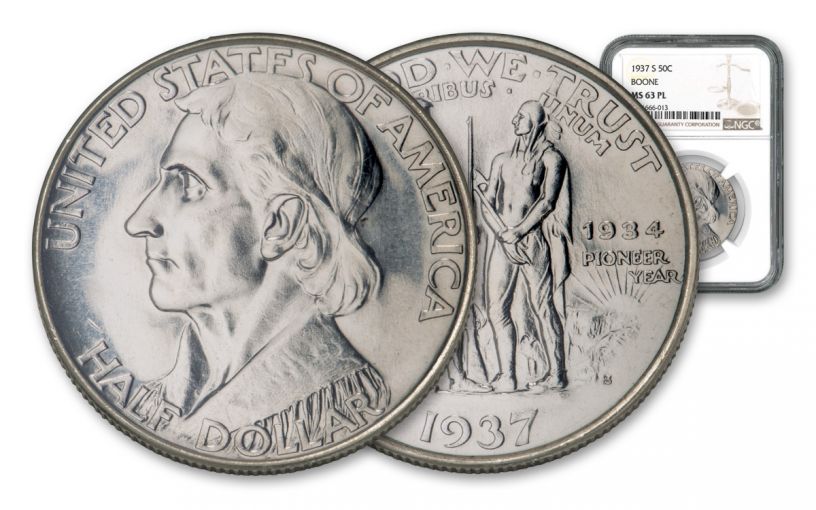 Availability: Out of Stock
This item is currently Out of Stock. Please sign up to be notified if this product becomes available.
Item #
349461
Add to Wish List Add to Wish List Wishlist is for registered customers. Please login or create an account to continue. Add to Compare

Did You Know Daniel Boone Had His Own Silver Half Dollar?

Issued from 1934 to 1938, the Daniel Boone Commemorative Half Dollar is a stunning coin struck in gleaming 90% silver. One of America’s most notable frontiersmen, “Dan’l” Boone killed bears, lived with and fought Indians, and battled the British during the Revolutionary War. But he’s best known for blazing the famous Wilderness Road into Kentucky through the Cumberland Gap in 1775 and for being portrayed on television by Fess Parker from 1964 to 1970.

To commemorate the 200th anniversary of the famous trailblazer’s birth in 1934, the U.S. mint struck these coins in an effort to help raise money for the restoration of historic sites associated with Boone and early Kentucky. However, the legislation for this coin did not specify the date, mint, or sales price – which served this coin well during the commemorative coin mania of the next few years, allowing this coin to be struck for five years at every U.S. branch mint!

And now you can get one of these fabulous commemoratives – one beautifully struck in 1937 at the San Francisco Mint. This coin is so magnificent that it was certified and graded by the Numismatic Guaranty Corporation (NGC) as being in beautiful Mint State-63 Prooflike (MS63 PL) condition. Prooflike coins are often the result of a planchet being struck with a fresh die, resulting in a level of luster not found in the majority of the mintage. In fact, of the 278,686 silver commemoratives of any type ever graded by NGC, only 1,581 have been deemed good enough to be designated as Prooflike specimens!

The coin’s obverse features a portrait of Boone sculpted by Augustus Lukeman. The reverse features Boone holding a treaty and musket next to Chief Black Fish, who adopted Boone as a son when he was captured by the Shawnee tribe in 1778. The San Francisco Mint struck just 2,506 of these coins in 1937 – and extremely low mintage for a commemorative release – and of those coins, NGC has graded just 125 in Prooflike condition!

Don’t wait to add this coin to your collection – a popular silver commemorative this magnificent will not last long so click it to your cart right now!

The 1934-1938 Daniel Boone Silver Half Dollar is one of America’s most popular commemoratives. Here’s your chance to get one of these impressive Boone Half-Dollars struck by the fabled San Francisco Mint by adding it to your cart today!