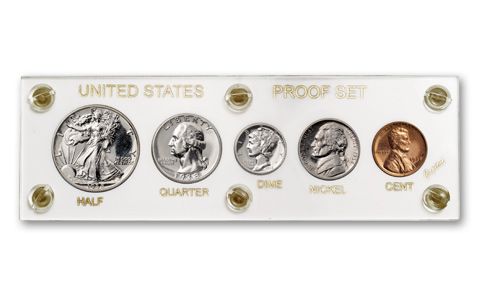 Availability: Out of Stock
Discontinued Product
Item #
225164
Add to Wish List Add to Wish List Wishlist is for registered customers. Please login or create an account to continue. Add to Compare

Orson Welles sent America into a panic in 1938 with his radio broadcast of H.G. Well's War of the Worlds. Walt Disney released Snow White and the Seven Dwarfs. And, Superman arrived from the planet Krypton to make his first appearance in Action Comics No. 1. So, that means this 1938 Proof Set was the first one he could have leapt over the mint to buy at their sales window! The set contains a Lincoln Cent, the first-ever Jefferson Nickel, and a 90% silver Mercury Dime, Washington Quarter and Walking Liberty Half Dollar. The mintage for 1938 went up a tad from 1937, but there were still only about 8,000 sets sold, making this the third-toughest of the modern sets. It's so tough, in fact, you'd better take a leaping bound over the cat, dog and kids, to order this hard-to-find set before it's gone!