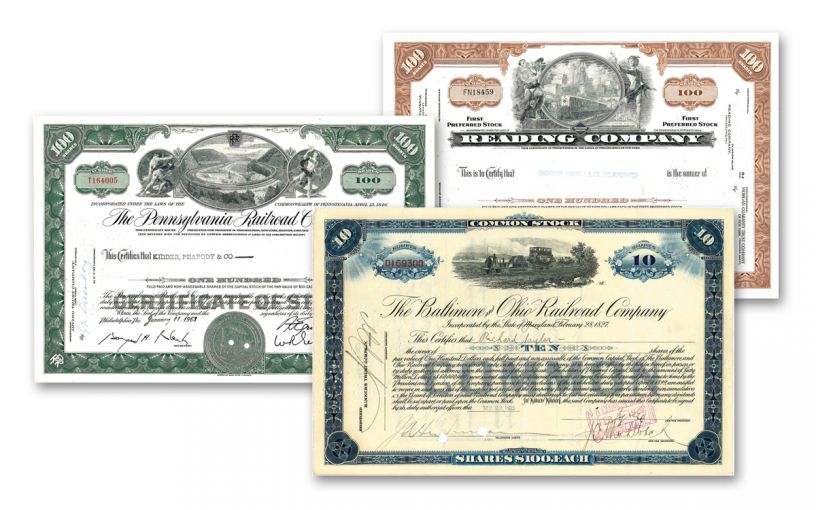 Availability: In Stock
This item will ship within 2 business days.
Item #
344400
Add to Wish List Add to Wish List Wishlist is for registered customers. Please login or create an account to continue. Add to Compare

Everyone who’s ever played the board game Monopoly™ knows that acquiring some or all of the railroad squares is essential for victory. But did you know those squares were actually based on real railroads? Invented by Charles Brace Darrow, the game features the Baltimore and Ohio Railroad, the Pennsylvania Railroad, the Reading Railroad, and the Short Line Railroad. The first three were actual railroads and the fourth was a variation on the Shore Fast Line in Atlantic City, a streetcar line rather than a railroad.

Now you can take a trip down memory lane with a set of actual railroad stock certificates from those same railroads featured in the game! Plunk one of these babies down during your next game of Monopoly and see your opponents’ eyes bulge and their jaws drop!

This three-piece set of railroad stock certificates features incredibly bright colors and sensational vignettes, making them an absolute must-have for any stock or bond collector. Plus, since these certificates were issued between the 1940s and 1970s, each is at least 35 years old! Vignettes include Tom Thumb, the first American-made steam locomotive, the famous Horseshoe Curve in Pennsylvania, and Greek figures flanking a train that sits before images representing modern industry. This set is real-life “Monopoly Money,” and it can be yours for less than $10 per certificate!

In the board game, the railroads are extremely good to own. They’re a steady source of cash and, due to their positioning as the fifth square on each side of the board, players are always at risk of landing on a railroad either through a dice roll or by a Chance/Community Chest card. Now you can own stock from those railroads, and you don’t even have to get a lucky roll of the dice to do it – just click this colorful Railroad Stock Certificates Three-Piece Set to your cart and you’ll be taking a trip on the Reading Railroad in no time!