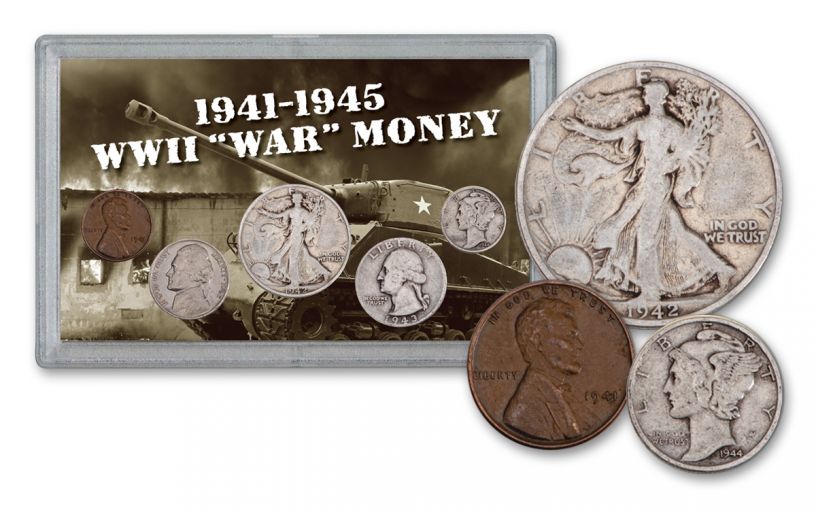 Availability: Available for Order
This item will ship 06/14/21
Item #
345066
Add to Wish List Add to Wish List Wishlist is for registered customers. Please login or create an account to continue. Add to Compare

During the World War II years of 1941-1945, Americans planted victory gardens, rationed goods, bought war bonds, and held scrap metal drives – all while Rosie the Riveter proved that yes, she COULD do it! The war effort on the home front helped ensure final victory on the battlefield as the entire nation sacrificed for the national good. As World War II raged on overseas and the war effort continued their support here at home, these were the coins that rattled in the pockets and change purses of America.

This five-piece set includes a Lincoln Cent, Jefferson Nickel, Mercury Dime, Franklin Quarter and Walking Liberty Half Dollar. As a special added bonus, you will also receive a WWII-era ration token and a Rosie the Riveter replica metal sign. Dates vary, but each set will include three coins struck in 90% silver. In addition, some sets will include coins modified for the war effort, like the one-year-only steel cent and 1942-1945 nickel that contained no nickel! Some sets will also include designs no longer seen in circulation, such as the Mercury Dime and Walking Liberty Half-Dollar.

It’s been nearly 75 years since Final Victory was achieved in the Second World War – a victory that could not have been won without the sacrifices made by ordinary folks on the home front. Commemorate a time when our nation pulled together with this special 1941-1945 Five-Piece Set of WWII-era coins. Each set comes housed in a custom-designed holder. It’s a must-have set for any World War II collection!