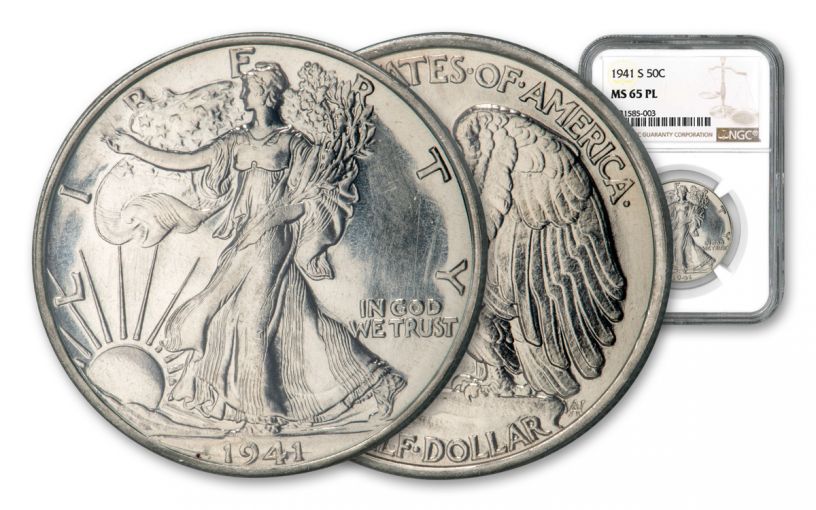 Availability: In Stock
This item will ship within 2 business days.
Item #
346454
Review this product
CC Payments as low as
$4,875.00 / month
Add to Wish List Add to Wish List Wishlist is for registered customers. Please login or create an account to continue. Add to Compare
Complete your collection with one of these:
Related Articles
Product Description

In 1941, America was changed forever when Japanese bombers attacked Pearl Harbor. It was the final straw that led to the United States entering the Second World War, and this coin may have been there to see it.

Struck at the San Francisco Mint, this spectacular Walking Liberty Half Dollar comes graded by the Numismatic Guaranty Corporation (NGC) as being in Gem Uncirculated Mint State-65 Prooflike (MS65 PL) condition. Out of the original mintage of more than eight million coins struck, NGC has graded just two coins as Prooflike condition, with none grading higher as of this writing. Another respecting third-party grading service, the Professional Coin Grading Service (PCGS) has no Prooflike coins of this date and mint mark in its report.

Rare and gorgeous, this 90% fine silver coin is a key date in any collection. As the finest Prooflike of its date and mint mark known, it will turn any collection into an instant world-class numismatic museum!

Simply put, this is the finest known Prooflike 1941-S Walking Liberty Half Dollar that we know of. And now it can be yours.