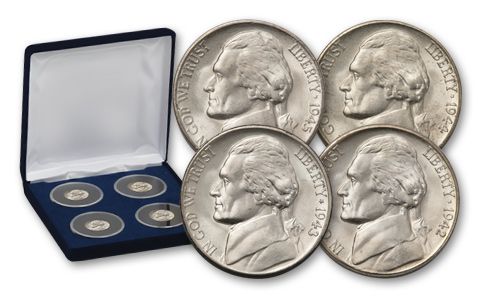 Availability: Available for Order
This item will ship 03/22/21
Item #
249558
Add to Wish List Add to Wish List Wishlist is for registered customers. Please login or create an account to continue. Add to Compare

Ever Hear of a Silver Nickel?

Just months after Pearl Harbor, government planners in Washington faced a sobering fact: Nickel, a vital war material was in short supply. To preserve the nation’s supply of the scarce element, they leapt into action, seizing the most readily available supply. Where did they get it? From the U.S. Mint! Between 1942 and 1945, the mint stopped using nickel in the Jefferson coins and replaced it with silver. The coins produced were as bright and shiny as silver dimes, quarters and halves! Because these Silver War Nickels were worth more than face value, the Mint put a huge mintmark on each, right above Monticello on the reverse, so they could pull them out of circulation after the war. This is the first time a “P” for Philadelphia mintmark was applied to coins! Today, Silver War Nickels are hard to find, especially in the Brilliant Uncirculated (BU) condition of the set of coins available here. You get one date for each of the four war years: 1942, 43, 44 and 45. Each set comes in a deluxe presentation case and includes a replica newspaper from November 9, 1942. Mints vary.