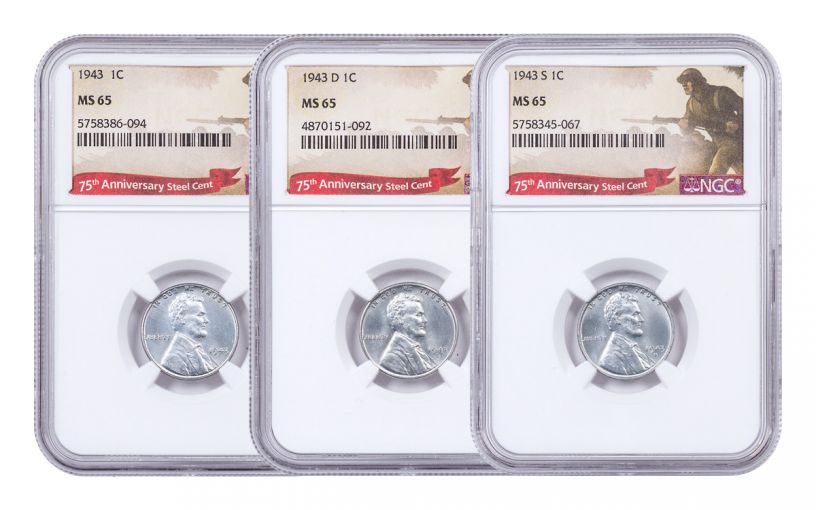 Availability: Out of Stock
This item is currently Out of Stock. Please sign up to be notified if this product becomes available.
Item #
314718
Add to Wish List Add to Wish List Wishlist is for registered customers. Please login or create an account to continue. Add to Compare

The Coins That Helped to Turn the Tide of World War II!

It's 1943 and the globe is engulfed in the largest war that civilization has ever known. Fighting brutal battles against the Axis powers in both Europe and East Asia, the Allies were finally starting to win crucial battles that would ultimately put victory within reach. Across the United States, all hands were on deck to support the troops and conserve raw materials for the expanding war effort. Chief among the metals needed for transformation into ammunition were copper and bronze, which were also essential for the production of Lincoln Cents.

After experimenting with different alloys and even testing out materials like plastic and glass, the United States Mint released a brand new Lincoln Cent in 1943 that replaced the previous coin's copper and tin with zinc-coated steel. Its release redirected copper at a crucial time for the United States military. Unfortunately, the new steel cent was often confused for dimes and would easily become stuck to magnetic objects. However, its one year of use provided the perfect pause. With victory closer at hand, a Lincoln Cent made from recycled shell castings would return in 1944. Now, more than 70 years later, you can own all three of these storied Steel Lincoln Cents in one spectacular set!