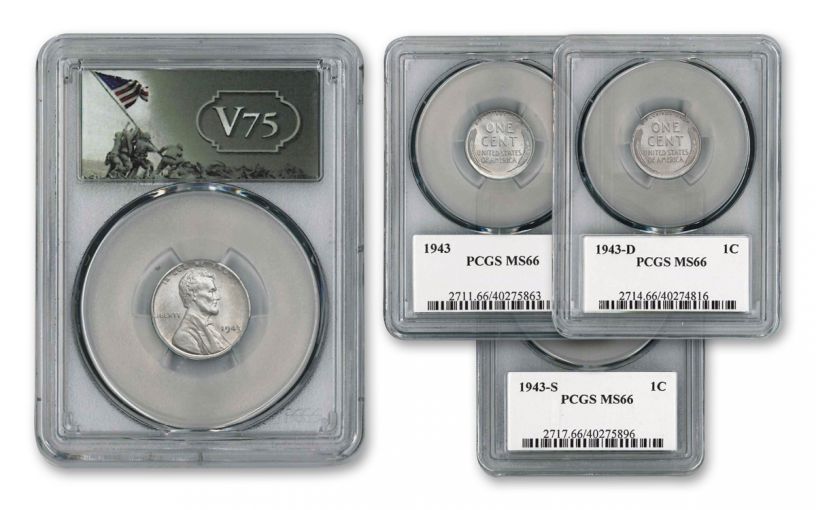 Availability: In Stock
This item will ship within 2 business days.
Item #
369265
CC Payments as low as
$89.50 / month
Add to Wish List Add to Wish List Wishlist is for registered customers. Please login or create an account to continue. Add to Compare

When World War II came calling, the United States Mint answered. Bronze and copper were desperately needed to produce ammunition, and so the mint turned over its supply. Since these metals were normally used to strike the Lincoln Wheatback Cent, the mint had to use something else to strike the nation’s pennies. So, for one year only — 1943 — the U.S. Mint struck the Lincoln Cent in zinc-coated steel!

The following year, the coin would return to its copper status, struck using melted down shell and bullet casings. It’s a story quite unlike any other in U.S. Mint history. These coins were the workhorse coins of World War II and were used every day in transactions ranging from buying a drink at the soda fountain to taking a break and heading to a movie double feature. Placed in circulation during the height of the Second World War, they were symbols of America’s determination to achieve final victory. It’s truly a historic coin that tells an incredible story.

Now you can secure one Lincoln Steel Cent from each striking mint — Philadelphia, Denver and San Francisco — all in one great three-coin set. We have a limited number of these 1943 “Steelies” graded by the Professional Coin Grading Service (PCGS) as being in Gem Uncirculated Mint State-66 (MS66) condition. Of the total number of submissions to PCGS for all three coins, only 15% grade MS66 or higher. Plus, each coin comes sealed in a PCGS display holder with a special V75 label celebrating 2020 as the 75th anniversary of the war’s end in 1945. An end that was helped thanks to these very Steel Cents

These coins are a must-have for any American or World War II collection! Get your set now before our limited supply runs out!