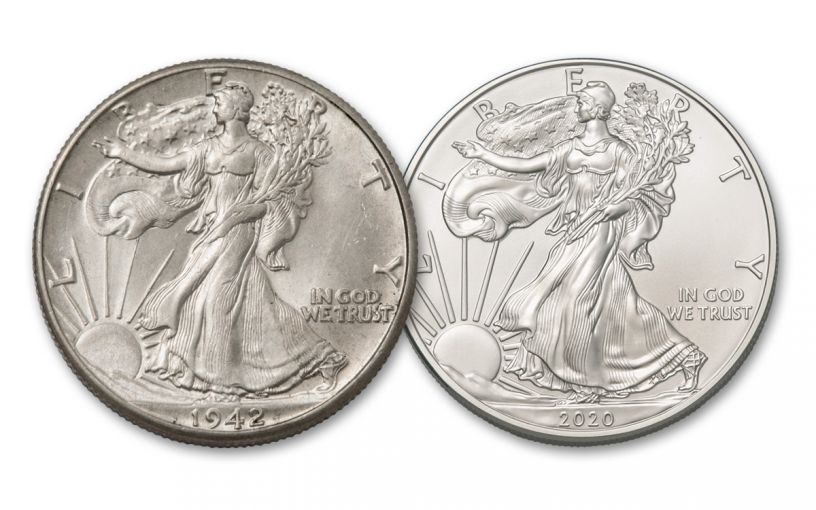 Availability: In Stock
This item will ship within 2 business days.
Item #
366276
Add to Wish List Add to Wish List Wishlist is for registered customers. Please login or create an account to continue. Add to Compare

75 Years of the Walking Liberty Design

One of the most powerful and iconic designs in all of American numismatics is Adolph Weinman’s Walking Liberty. The design features Liberty striding proudly forward, her body draped in an American flag, as a new day dawns. First struck as the Walking Liberty Half Dollar from 1916 to 1947, the design was so beloved that it was chosen for the obverse of the modern-day American Silver Eagle Dollar, which has been struck every year since 1986. Today’s Silver Eagles are also prized for John Mercanti’s reverse design that features a Heraldic Eagle. With the United States Mint announcing that 2020 would be the last full year of Mercanti’s design, these coins have been in huge demand by collectors.

This two-piece set of Brilliant Uncirculated (BU) coins brings together a 1945-dated Half Dollar and a new 2020 Silver Eagle — 75 years of Walking Liberty history — in one fantastic offering. Plus, each set will come beautifully housed in a deluxe presentation case. Order your coins today and soar with America’s most popular and collected Eagles!