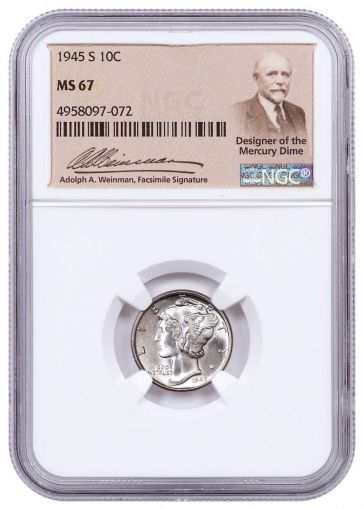 Availability: Out of Stock
This item is currently Out of Stock. Please sign up to be notified if this product becomes available.
Item #
356707
Add to Wish List Add to Wish List Wishlist is for registered customers. Please login or create an account to continue. Add to Compare

Any collector worth their salt will tell you that the most important coins of any series are generally the first- and last-year issues. Without these bookends, your collection simply isn’t complete! This offer gives you the opportunity to secure the last-year-of-issue 1945 Mercury Dime struck in highly pure 90% fine silver at the San Francisco Mint!

Originally known as the Winged Head Liberty Dime, the Mercury Dime was issued from 1916-1945. In the century since it was first issued, the Mercury Dime has gone on to become one of America’s most beloved coins. Its iconic design bears it namesake: an image of Lady Liberty with a winged Phrygian cap that makes her look like the Roman god Mercury. The coin’s reverse depicts a fasces, symbolizing unity and strength, and an olive branch, signifying peace. Designed by sculptor Adolph A. Weinman, the image was so popular that when the U.S. Mint struck its first Palladium Eagle coin in 2017 it selected Weinman’s design!

Your 1945-S Mercury Dime has been graded by the Numismatic Guaranty Corporation (NGC) as being in high-grade Superb Gem Uncirculated Mint State-67 (MS67) condition with a sharp strike full mint luster and exceptional eye appeal. The San Francisco Mint struck just 16% of the total mintage of Mercury Dimes throughout the coin’s entire run – and with many of those coins lost to the melting pots for their precious silver, obtaining them in this high-grade condition is a scarce opportunity. As a special tribute to Adolph A. Weinman, each coin has been sonically sealed in an acrylic capsule with an exclusive label that features a portrait of the Weinman along with his facsimile signature.

We have just 100 of these last-ever San Francisco Mint Mercury Dimes graded in MS67 condition available – and they will go fast! Here’s your chance to get one of America’s most beautiful coins in breathtaking condition. Click one to your cart today!

Get the last-year 1945-S Mercury Dime struck at the San Francisco Mint now by clicking this high-grade, key-date coin to you cart right now!