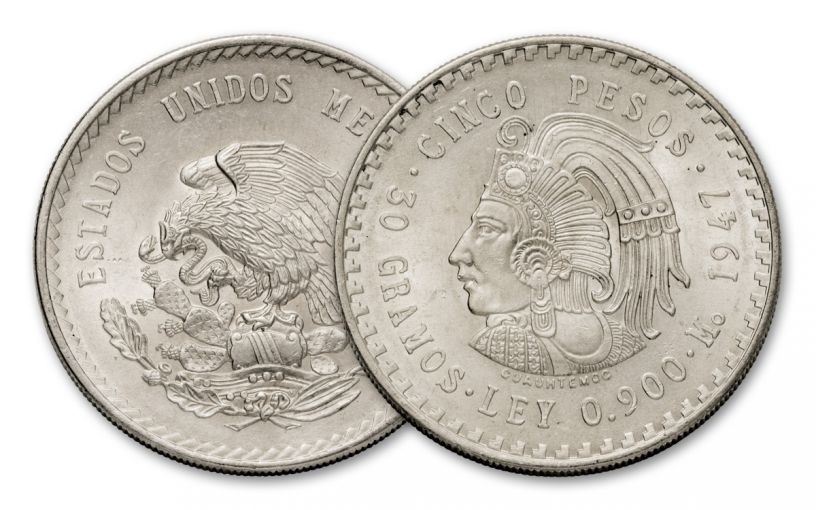 Availability: In Stock
This item will ship within 2 business days.
Item #
222573
Add to Wish List Add to Wish List Wishlist is for registered customers. Please login or create an account to continue. Add to Compare

The Mexican Silver That Launched a Thousand Ships!

Vast amounts of Mexican silver were discovered during the splendor of the Aztec Empire. After the Conquistadores arrived and laid siege to the native population, literally thousands of Spanish ships laden with this precious cargo set sail from the New World back to Spain. To this day, there is an allure and romance to Mexican silver like no other!

In 1947 and 1948, Mexico honored Cuauhtemoc, the last king of the Aztec Empire, by striking a legal-tender coin in one ounce of 90% fine Mexican silver. Cuauhtemoc ascended to the throne in 1520 at a time when the Aztec empire was besieged by Spanish invaders from one side and ravaged by smallpox on the other. Just 25 years old when he assumed power, Cuauhtemoc reigned for only a year before surrendering the kingdom to Hernan Cortes. Fearing Cuauhtemoc would lead a revolt, Cortes had the young king hanged to squash any thoughts of rebellion against Spanish rule.

This beautiful legal tender coin struck by the Mexico City Mint pays tribute to the young king with a remarkable design reminiscent of Mesoamerican artwork from the age of Cuauhtemoc and the Aztec empire. At 40 mm in diameter, it’s also nearly the size of an America Silver Eagle! Your coin comes in Brilliant Uncirculated condition so you can see every detail of the young Aztec King’s face and royal headgear. Get yours now! Date varies.