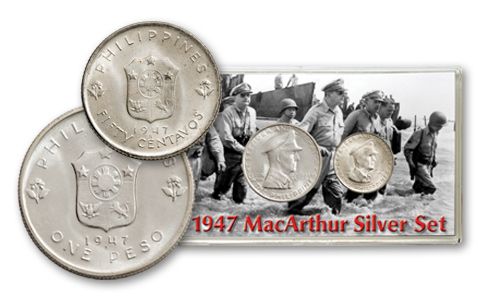 Availability: In Stock
This item will ship within 2 business days.
Item #
239751
Add to Wish List Add to Wish List Wishlist is for registered customers. Please login or create an account to continue. Add to Compare

General MacArthur is Back by Popular Demand

When General MacArthur fulfilled his promise and returned to liberate the Philippines in World War II, he became a living legend in the island nation. In 1947, they honored him by striking these 50-Centavo and One-Peso MacArthur silver coins. Struck at the San Francisco Mint, they show a profile of the general in uniform. They were an immediate hit, not just there but here as well. They've been popular with collectors ever since. But the mintages were so low, and those who have them are so reluctant to part with them, we can't offer them very often. We have a small number of complete two-coin sets available for you in Brilliant Uncirculated (BU) condition right now. But hurry-when the word gets out, they'll disappear fast.