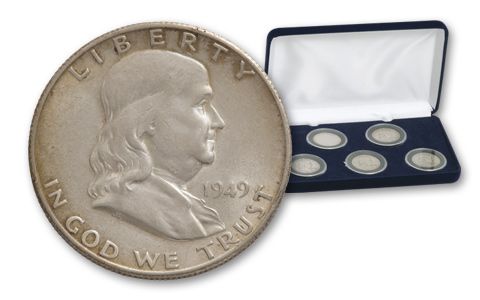 Availability: Available for Order
Discontinued Product
Item #
235675
Review this product
Add to Wish List Add to Wish List Wishlist is for registered customers. Please login or create an account to continue. Add to Compare
Complete your collection with one of these:
Product Description

Get a Franklin Half Dollar of Every Date Struck by the San Francisco Mint!

The Franklin Half Dollar was the first circulation coin in the United States to depict a real historical figure that was not a U.S. President. But long before the series was cut short by the assassination of President John F. Kennedy in 1963, the San Francisco Mint stopped striking the coin. The first S-Mint Franklin was struck in 1949, and the last in 1954 with none being struck in 1950. That means a complete San Francisco Mint Franklin Half Dollar Collection consists of only five coins.

With such a brief run from a relatively short time ago, one would think it would be pretty easy to put together a complete five-piece set, right? But that’s just simply not the case. Today, more than 65 years after the San Francisco Mint struck its last Silver Franklins, these big 90% silver coins are hard to find. Why? Well, for one thing there weren’t very many minted to start with. In fact, San Francisco struck barely 7% of all Franklins minted! And, while these coins were used heavily in circulation during the 1950s, an even worse fate awaited them, as many were melted down in the 1960s when silver prices skyrocketed.

Well, Fear not, Fearless Franklin Fanatics, because we’ve assembled a small number of complete S-Mint Franklin sets, with each coin in Fine or better condition. Don’t miss out; click these Fantastic ’Frisco Franklins to your cart today!

Franklin Half Dollars are attractive coins gaining in collector popularity thanks to their rich history, silver content and nice size. Here’s your chance to start or add to your collection with a complete set of Franklin Half Dollars struck at the San Francisco Mint. Click one to your cart today!