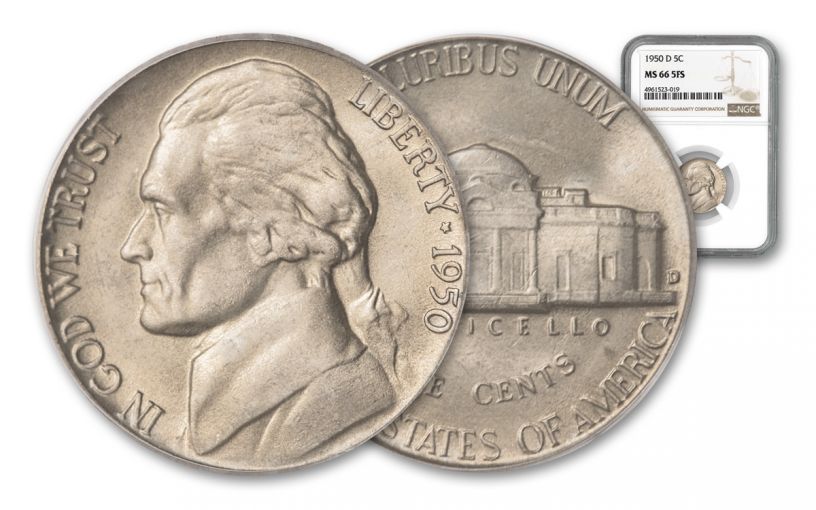 Availability: Out of Stock
This item is currently Out of Stock. Please sign up to be notified if this product becomes available.
Item #
350927
Add to Wish List Add to Wish List Wishlist is for registered customers. Please login or create an account to continue. Add to Compare

The 1950-D Jefferson Nickel is the lowest mintage of the entire series. Just over 2.6 million were struck – compare that to 2018 when more than 1.2 BILLION were struck! So why the shortage? The United States was in recession that year, and little demand existed for nickels in the area served by the Denver Mint.

Of course, this shortage resulted in a frenzy of hoarding, with thousands of rolls being preserved. This isn’t just the lowest mintage Jefferson of all time, it’s also the most widely hoarded nickel since the 1938-D Buffalo! Finding a quantity of this date in any condition is difficult, but we managed to find a small number graded by the Numismatic Guaranty Corporation (NGC) as being in Gem Uncirculated Mint State-66 (MS66) condition – just 1 point away from a Superb Gem grade – with a special FS or “Full Steps” designation, meaning the steps of Jefferson’s Monticello home on the coin’s reverse are well-struck and visible.

Don’t miss your chance to own the lowest mintage Jefferson Nickel in one of its highest grades! Click one of these gems to your cart now before our limited supply is all gone!