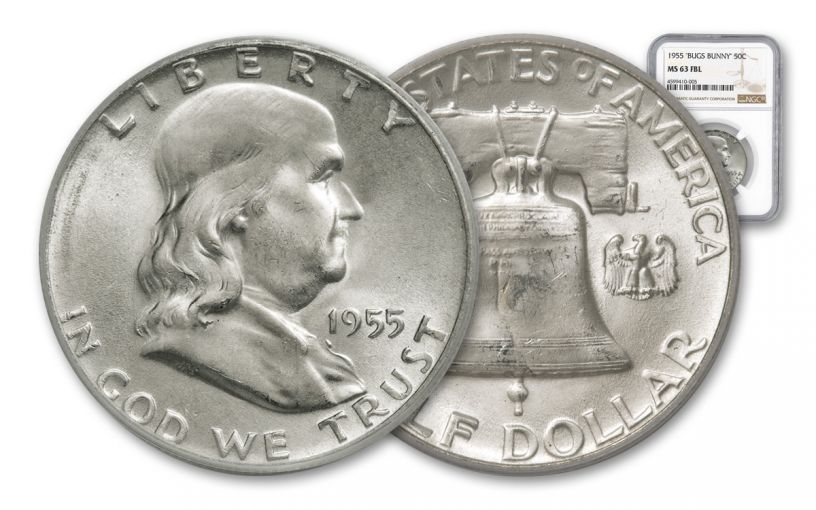 Availability: Out of Stock
This item is currently Out of Stock. Please sign up to be notified if this product becomes available.
Item #
320017
Add to Wish List Add to Wish List Wishlist is for registered customers. Please login or create an account to continue. Add to Compare
Product Description

What Great Big Teeth You Have!

Not only does the 1955-P Silver Franklin Half Dollar have the lowest mintage of the entire series, but it has a unique story as well -- during the minting process, the dies were struck together without a blank planchet in between them. This “die clash” resulted in details from the reverse ending up on the obverse, giving Benjamin Franklin buck teeth -- hence the nickname “Bugs Bunny” Franklins!

The coins in this offering are even more unique because they feature a superior strike in what professional coin graders refer to as “Full Bell Lines.” This condition exists when the seven parallel lines that curl around the bottom of the Liberty Bell design on the coin’s reverse are fully visible.

Because millions of Franklin Half-dollars have been melted for their 90% silver composition many of the key dates and varieties can be difficult to find – especially in the wonderful Mint State-63 Full Bell Lines (MS63 FBL) condition that these coins are in as graded by the Numismatic Guaranty Corporation (NGC). Get yours now before they are all snatched up by collectors.

The Franklin Silver Half Dollar is popular and collectible series. Get yours now, graded as Mint State-63 Full Bell Lines (MS63 FBL) by NGC!