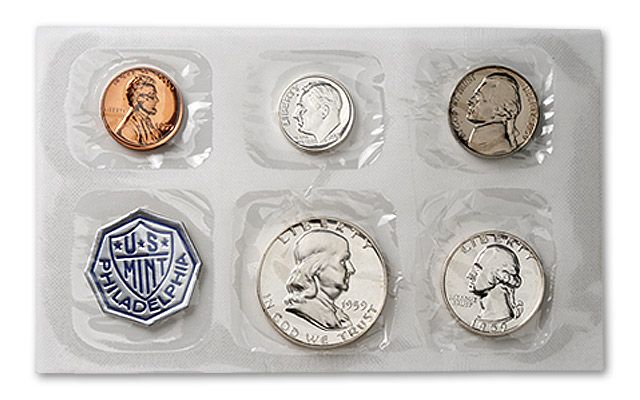 Availability: Available for Order
This item will ship 07/19/21
Item #
182882
Add to Wish List Add to Wish List Wishlist is for registered customers. Please login or create an account to continue. Add to Compare

Beginning in 1959, the Treasury changed the packaging of the Mint Sets, and reduced the number of coins in each set. A notice in the November 1959 issue of The Numismatic Scrapbook Magazine provided the following information: "A new packaging system will be introduced with the 1959 issues. Each set, with its cardboard disc bearing the name of the mint, will be enclosed by machine in a clear plastic packet. As this type of holder allows the coins to be viewed obverse and reverse, two coins from each mint are no longer necessary. Those who want double sets can order same as the restriction of one set per person has been removed. One person may order up to 80 sets. Apparently the mint sets will be packaged by the same system used to pack proof sets."

About the sets: The ordering period for 1959 Mint Sets began on November 1, 1959, and the March 31 deadline that had been in place for previous years was removed. The coins in the 1959 Mint Sets were Uncirculated pieces pulled from regular production runs, so the quality of the individual coins varies widely from set to set, and even within a set.

The 1959 Mint Set contained ten coins, including the following:

Original packaging: In 1959, the U.S. Mint began packaging Mint Sets using materials similar to those for the 1959 Proof Sets. The five coins from the Philadelphia Mint were placed in one pliofilm pack; the five coins from the Denver Mint were placed in another. The two pliofilm packs were inserted, along with a card, into a mailing envelope for shipment to customers.

Castro became the dictator of Cuba and visited Washington, D.C.