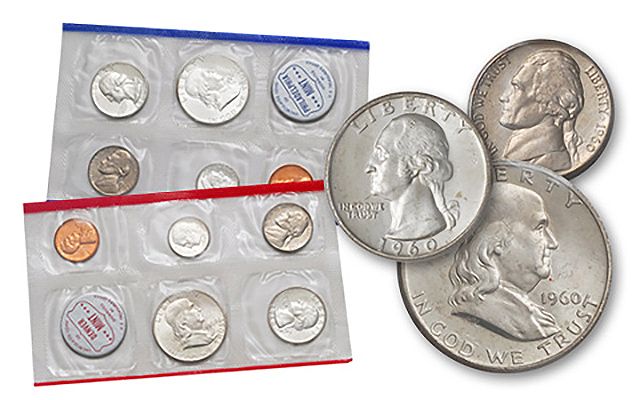 Availability: Out of Stock
This item is currently Out of Stock. Please sign up to be notified if this product becomes available.
Item #
182883
Add to Wish List Add to Wish List Wishlist is for registered customers. Please login or create an account to continue. Add to Compare

About the sets: The coins in the 1960 Mint Sets were Uncirculated pieces pulled from regular production runs, thus the quality of the individual coins varies wildly from set to set, and even within a set.

The 1960 Mint Set contained ten coins, including the following:

The debates between Presidential candidates John F. Kennedy and Richard Nixon were the first ever to be televised (JFK won the debates and the Presidency). The Minneapolis Lakers basketball team moved to Los Angeles. Clark Gable died of a heart attack.

Francis Gary Powers and his U-2 spy plane were shot down over Russian territory. The world population reached three billion people.