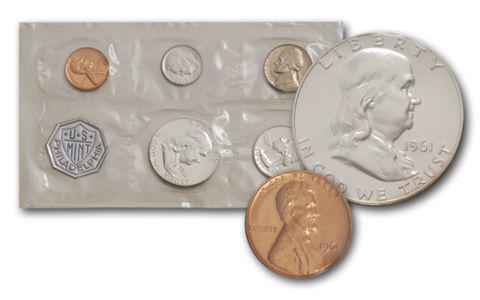 Availability: In Stock
This item will ship within 2 business days.
Item #
222229
Add to Wish List Add to Wish List Wishlist is for registered customers. Please login or create an account to continue. Add to Compare

Enthusiasm for the 1961 Proof Sets was incredible. Beginning on November 1, 1960, the Mint received an average of 20,000 orders a day, and by December 9, over 2,200,000 sets had been sold. By February 1961, the Mint had received orders for 3,000,000 sets! To handle the increased demand, the Mint installed new-fangled IBM machines to process order, new presses to strike coins, and switched to a 24-hour a day production schedule.

Look for the extremely rare and popular 1961 Doubled Die Reverse Half Dollar variety, with strong doubling at "E PLURIBUS UNUM" and "UNITED STATES".

Beware of buying unopened 1961 Proof Sets. "Sealed" Sets are likely to contain substituted coins (and even non-coins). Flat packs should be examined for small tears or cracks in the pliofilm. Even a hole the size of a pin can let in oxygen or moisture, both of which will react chemically with the metal of a coin, causing unsightly spots.