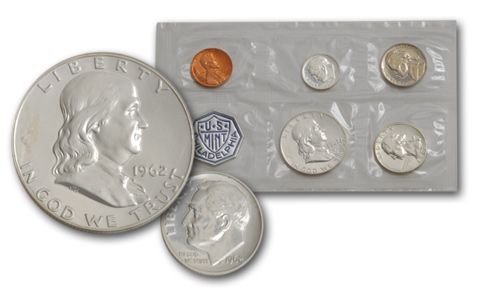 Availability: In Stock
This item will ship within 2 business days.
Item #
222230
Add to Wish List Add to Wish List Wishlist is for registered customers. Please login or create an account to continue. Add to Compare

We recently stumbled upon an amazing discovery – a massive hoard of more than 600 U.S. Proof Sets from 1962! A hoard of this size and nature is virtually unheard of in today’s market. Each set contains a Lincoln Cent, Jefferson Nickel, Roosevelt Dime, Washington Quarter and Franklin Half Dollar, all struck the very same year that John Glenn became the first American to orbit the Earth. A year prior, President John F. Kennedy was asking Congress to raise money for a moon landing. Within two years, these sets would no longer contain coins struck in 90% silver.

Struck at the “Mother Mint” in Philadelphia, the 1962 Proof Set continued the U.S. Mint’s time-tested format’s immense popularity with total sales of 3,218,019 sets – an all-time high to that point. Due to the success and demand for these sets, The Mint set a maximum limit of no more than 10 sets per order in an attempt to curb collectors buying up these for speculative purposes.

Each coin comes sealed in its own compartment between two sheets of flat pliofilm. An octagonal, foil seal imprinted with “US MINT PHILADELPHIA” was placed in a sixth compartment, and the flat pack was then inserted into a mailing envelope with a card. Take advantage of our discovery and secure yours now!