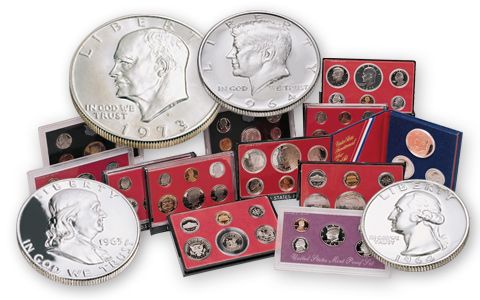 Availability: Out of Stock
This item is currently Out of Stock. Please sign up to be notified if this product becomes available.
Item #
228889
Add to Wish List Add to Wish List Wishlist is for registered customers. Please login or create an account to continue. Add to Compare

The Pinnacle of Perfection Available to Only a Few

This complete collection of 30 years of U.S. Proof Sets from 1963-1992 encompasses one of the most storied periods in American history. It covers all eight presidencies from Kennedy to Clinton and includes the Vietnam War, the first moonwalk, the 1980 U.S. Olympic Hockey team's stunning upset of the Soviets, the fall of the Berlin Wall and our military's return to greatness in the first Gulf War. The collection includes all 27 U.S. Proof sets issued from 1963 to 1992 (no Proof sets were issued from 1965-1967). Just look at some of the key coins you'll receive:

These Proof Sets are the U.S. Mint's legacy- an enduring guarantee that these are the "Best of the Best." But due to recent increases in the price of vintage U.S. coins and silver bullion, as well as the age and scarcity of many of these official U.S. Proof Sets, orders will be taken on a strict first come, first-served basis. Reserve your sets now! Not only are they sure to be the key coins in your collection, they also make exceptional gifts!