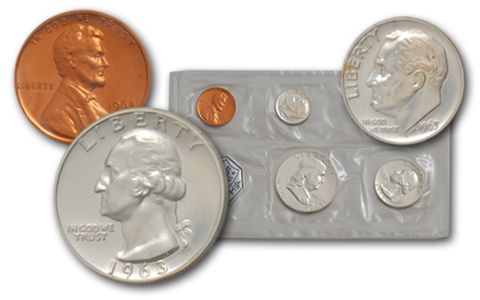 Availability: In Stock
This item will ship within 2 business days.
Item #
222231
Add to Wish List Add to Wish List Wishlist is for registered customers. Please login or create an account to continue. Add to Compare

In 1963, sales of Proof Sets dropped from the 1962 high of 3,218,019 Sets to just slightly over 3,000,000. Demand for the 1963 sets was slow in the first half of the year, but picked up dramatically in the second half of the year. Unfortunately, in order to meet the demand, the Mint shut down orders on October 1, freezing out some last-minute buyers. 1963 was the last year for the Franklin Half Dollar design, although no one knew that at the time. Had they known, the mintage for the year might have been even higher.

About the sets: 1963 Proof Coins are found with Brilliant, Cameo and Deep Cameo surfaces. Deep Cameo Proofs are the most desirable Proofs. While very scarce, these coins are highly sought out by collectors.

Some 1963 Proof Sets may contain a rare Doubled Die Reverse Cent (examine "ONE CENT", "FG" [the designer's initials], and "UNITED STATES OF AMERICA"). Dimes offer the potential of three different rare Doubled Die Reverses (examine "UNITED STATES OF AMERICA" and "ONE DIME"). A different rare 1963 Doubled Reverse Dime shows evidence of doubling on all the reverse lettering, the torch and leaves.

Flat packs should be examined for small tears or cracks in the pliofilm. Even a hole the size of a pin can let in oxygen or moisture, both of which will react chemically with the metal of a coin, causing unsightly spots.