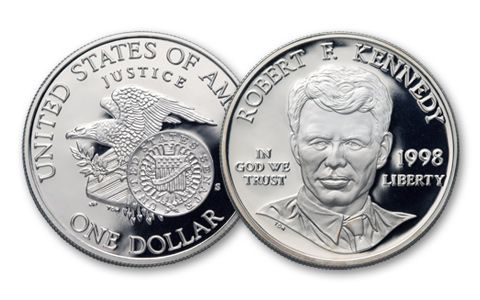 Availability: Out of Stock
This item is currently Out of Stock. Please sign up to be notified if this product becomes available.
Item #
235662
Add to Wish List Add to Wish List Wishlist is for registered customers. Please login or create an account to continue. Add to Compare

Most Powerful Brothers in U.S. History

Following the assassination of President John F. Kennedy on Nov. 22, 1963, his widow Jackie eloquently spoke what so many Americans were feeling when she quoted a line from “Camelot,” a popular Broadway musical of the 1960s: “Don’t ever let it be forgot, that once there was a spot, for one brief shining moment that was Camelot.”

Less than 5 years later on June 6, 1968, JFK’s brother Robert was assassinated while on the brink of becoming the Democratic Party’s nominee in the 1968 Presidential Election. The U.S. Attorney General during his brother’s presidency, “Bobby” Kennedy was a link to JFK’s Camelot and his death served as an exclamation point to the turbulent 1960s.

No two brothers have had such a lasting impact on United States history. Their tragic history and shocking assassinations have since entered our nation's collective consciousness as a modern Camelot.

To honor the fallen president, the U.S. Mint struck a new half dollar in 1964. Originally intended as a one-year-only replacement for the Franklin Half Dollar, it proved so popular that it has been struck every year since. However, 1964 was the ONLY year it was struck in 90% silver.

To pay tribute to the legacy of the Kennedy Brothers and their vision of an American Camelot, we’ve paired an immaculate 1964 Silver Kennedy Half Dollar Silver Proof with another Kennedy commemorative – the 1998 Robert Kennedy Silver Dollar. Struck in 90% silver, the Kennedy Dollar was issued to mark the 30th anniversary of Robert’s assassination. It’s the perfect bookend to the Kennedy Silver Half Dollar

Together these coins make an enduring memento of the family many consider to be “American Royalty.” Each set comes in a deluxe presentation case and includes a certificate of authenticity. Don't wait, every year these coins get harder to find.

America’s short-lived Camelot was a time when America was seen as a beacon of hope. Its lasting legacy was to inspire and encourage the country to move forward. Now you can pay tribute to the Kennedy legacy with this special two-piece set. Add it to your cart today!