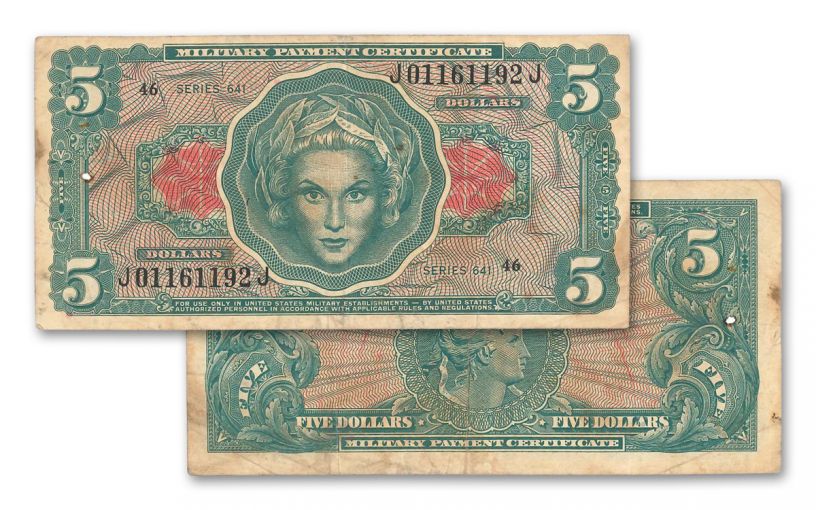 Availability: In Stock
This item will ship within 2 business days.
Item #
228286
Add to Wish List Add to Wish List Wishlist is for registered customers. Please login or create an account to continue. Add to Compare

Issued from August of 1965 until October of 1968, this $5 Military Payment Certificate is known to collectors as a “Medusa” note because of the hairstyle of the woman on the obverse – whose actual name is “Laura.” Unlike standard U.S. currency, these notes were issued during the Vietnam War to soldiers serving overseas, and were created to be tightly controlled and demonetized at a moment’s notice.

Military Payment Certificates (MPC) were first used following WWII to help local currencies. American GIs quickly discovered that they could use U.S. dollars for less than the accepted conversion rate and this helped spawn a sprawling black market network. To combat this, the U.S. military introduced the MPC program. Unlike U.S. currency, they were issued by the Department of Defense NOT the Treasury Department. During the Vietnam War, these notes were changed frequently so any black marketers hoarding these notes were left with bundles of worthless paper. Sometimes these folks got so upset when this happened that the nearest U.S. base would be attacked the next day in retaliation.

The Series 641 MPCs were issued on August 31, 1965 and were redeemed on October 21, 1968. These colorful certificates ranged in face value from 5 cents all the way up to $10. Each featured a lovely image of Laura, but only the $5 certificate had the haunting image of what appeared to be the Greek Gorgon Medusa hypnotically staring out from the note as if she were trying to burn a hole in your soul. These $5 certificates are the most popular and collectible MPCs of Series 641, and the certificates available in this offer all come in Fine to Very Fine (F-VF) condition.