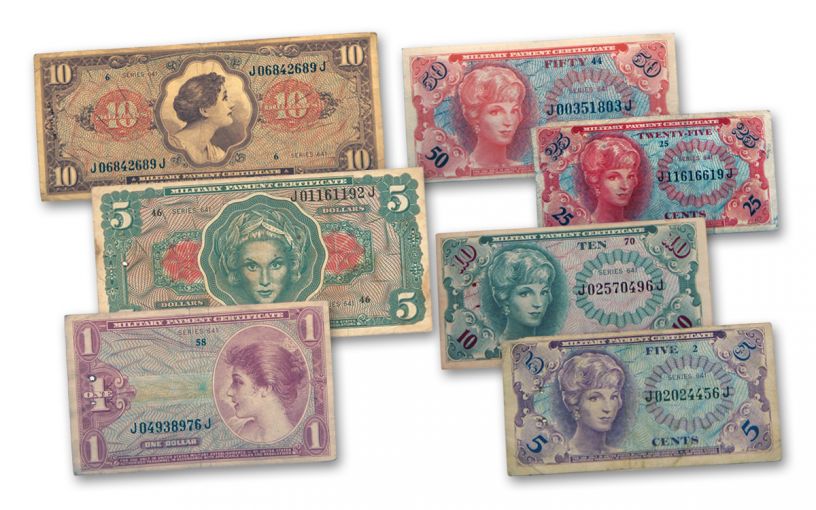 Availability: In Stock
This item will ship within 2 business days.
Item #
334915
Review this product
CC Payments as low as
$124.50 / month
Add to Wish List Add to Wish List Wishlist is for registered customers. Please login or create an account to continue. Add to Compare
Complete your collection with one of these:
Product Description

Instead, between August 31, 1965 and October 21, 1968, U.S. troops were issued Military Payment Certificates (MPC), exactly like those in this genuine seven-note Series 641 Collection! Unlike standard U.S. currency, these notes were issued only to soldiers serving overseas, and were created to be tightly controlled and demonetized at a moment’s notice.  The first military note series ever issued in Vietnam, these paper Five Cent, Ten Cent, Twenty-Five Cent, Fifty Cent, One Dollar, Five Dollar and Ten Dollar certificates were circulated for only a short period of time, and most were destroyed – but not all!

Now, after more than 50 years, we’ve managed to acquire a small number of authentic 1965-1968 MPCs in Lightly Circulated condition and assembled a small hard of complete seven-piece sets! It took some doing, too. As anyone who has served overseas knows, GIs were forbidden from using MPC notes off base. But when they discovered they could exchange MPC notes for several times their value with local merchants, many GIs fell victim to temptation – they’d even have relatives send cash from home, convert it to MPC notes and then make a killing in local trade! To flush out the worst offenders and their black market partners, the Brass would periodically carry out sudden cancellations of existing MPC currency, replacing it with new issues. When C-Day (Conversion Day) arrived unannounced, troops were confined to base to prevent contact with the locals. Neither soldiers nor the locals wanted to get stuck with worthless money, creating an incentive not to hoard these notes.

Whether you remember spending them during your tour in Vietnam or just want to add a genuine piece of U.S. military history to your currency collection, don’t miss this opportunity.  We have less than 70 sets available, so don’t wait; secure yours today!