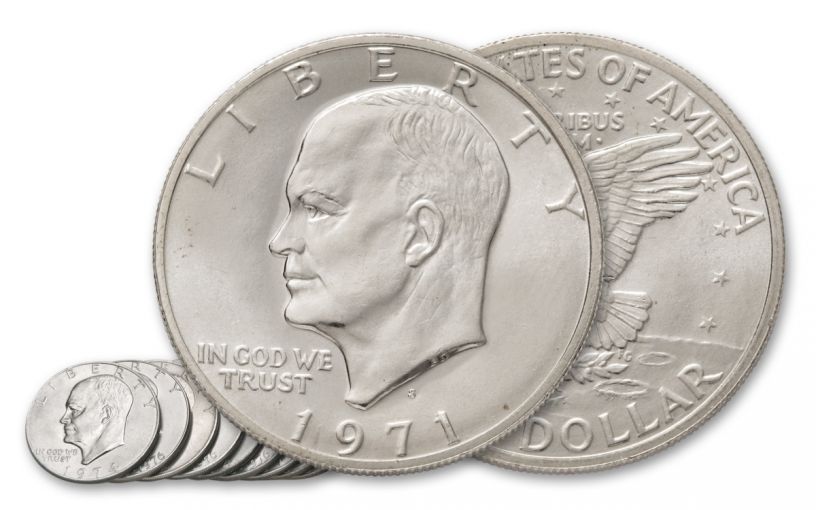 Availability: Out of Stock
This item is currently Out of Stock. Please sign up to be notified if this product becomes available.
Item #
263982
Add to Wish List Add to Wish List Wishlist is for registered customers. Please login or create an account to continue. Add to Compare
Recommended Products
Product Description

The Last of the Large-Sized Dollars

2021 marks the 50th anniversary of the Eisenhower Dollar, with its classic design of our former president paired with a reverse taken from the mission patch of Apollo 11. This series was the last large-sized dollar ever struck for circulation, and only lasted from 1971 to 1978. Even so, these coins are treasured pieces of American history, and in 2021 the series celebrated the 50th anniversary of its debut!

A Stirring Tribute to “Ike”

Here we’ve collected a ten-piece set of Ike Dollar struck between 1971 and 1978. The vivid memories of this big dollar are one of the reasons many people started collecting coins in the first place. On the obverse is the bust of Dwight David Eisenhower — the nation’s 34th President and a United States Army Five-Star General who served as the Supreme Allied Commander of Allied Forces in Europe during World War II. The coin’s reverse is the same design as that from the insignia of the Apollo 11 mission that landed the first men on the moon. These two designs together pay tribute to one of America’s greatest presidents and one of the country’s greatest achievements all on one coin! Dates will vary and each coin ranges in grade from Extremely Fine to About Uncirculated (XF–AU) condition.

It’s been more than 40 years since the last “Ike” Dollars rolled off the presses at the U.S. Mint and today many Ike Dollars can command high prices. Finding one or two of these beauties today is tough enough let alone grabbing 10 coins all in one fell swoop like this! You’ll like these Ikes — so don’t short-change your collection; order this 10-piece set today!

Secure not one, not two, but TEN Eisenhower Dollars struck from 1971 to 1978. Start or add to your collection today by clicking one of these 10-piece sets to your cart today!