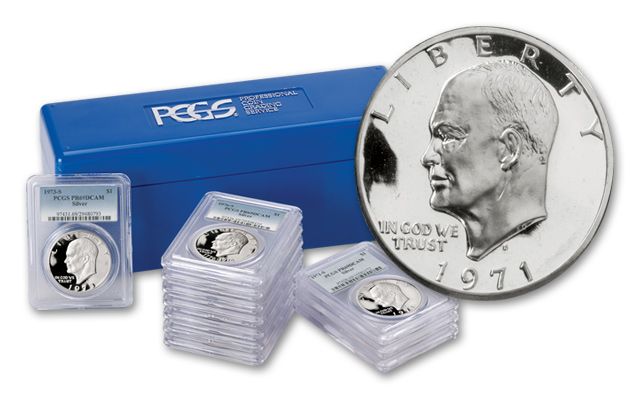 Availability: Out of Stock
Discontinued Product
Item #
225843
Add to Wish List Add to Wish List Wishlist is for registered customers. Please login or create an account to continue. Add to Compare

Every week we get unsolicited offers for private collections, hoards and auctions. Yet, we pass on most of them - sometimes because the quality doesn't meet our high standards or because we're not convinced they'll appeal to customers like you. But, every so often, we discover something that's too tempting to ignore. And, that's precisely what happened when we came across these complete sets of Proof Eisenhower Dollars minted from 1971 to 1978!

They are the Cream of the Crop, all in a Complete Collection! Don't confuse these Proofs with the Ike dollars you plucked from your change in the 1970s. Unlike similar coins issued for general circulation, Proof Ikes were issued in far fewer numbers - up to 20 times fewer, to be exact. And, these coins aren't just any Proofs. Each one in our 11-piece matched sets has been graded near-perfect Proof 69 Deep Cameo (PR69 DCAM) by Professional Coin Grading Service (PCGS). As its name suggests, Deep Cameo Proofs give each coin's design a distinct high-contrast cameo effect, with frosted devices and lettering sparkling against shimmering mirrored fields. And, demand for high-quality modern issue coins like these has become one of the fastest growing areas in the U.S. coin market!

Independently Graded and Encapsulated, all 11 proofs in this set have been certified and graded as near-flawless PR69 by PCGS, one of the leading independent third-party grading services in the world. Of the total mintage of all Proof Ike Dollars, only 2% have been graded in PR69 or higher. That's a miniscule percentage! WWII may be over, but Ike is still commanding a lot of attention. Today, a single Eisenhower Dollar in perfect PR70 Deep Cameo condition could set you back four figures or more. But, even if you have very deep pockets, assembling a set this complete in perfect PR70 condition is impossible. That's because NO perfect Proof 70 Deep Cameo coins exist for three of the years in this set - making this collection of near-perfect matched proofs the highest graded and finest known available! Who says you can't get the very best for less? You can own all 11 Ike Dollars in PR69 Deep Cameo condition for only $54 per proof while they last. Just don't wait - our limited quantity of these sets is sure to go fast! Each Dollar in this complete Proof collection has been professionally certified as PR69 Deep Cameo by PCGS - among the highest-graded Ike Dollars in existence! Each Collection Includes: