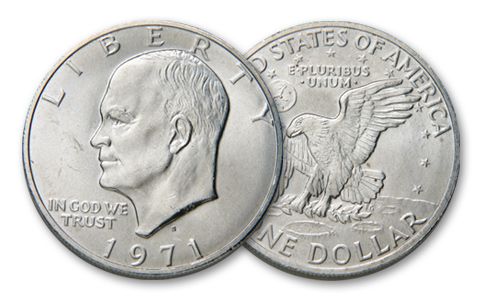 Availability: Out of Stock
This item is currently Out of Stock. Please sign up to be notified if this product becomes available.
Item #
228790
Add to Wish List Add to Wish List Wishlist is for registered customers. Please login or create an account to continue. Add to Compare

A Deal On Silver Dollars That Will Have You Saying "I Like Ike!"

When Eisenhower dollars were released in 1971, they were the first U.S. Dollar coin struck in 36 years! In addition to the millions of standard copper-nickel versions that were commonly found in change, a small mintage of Ikes was struck in 40% silver exclusively for collectors. The mintage was so small that there were 38 times more "change" Ikes than these special Brilliant Uncirculated silver collector coins! In the 1980s, when silver reached $50 an ounce, many Silver Ikes were melted down by refiners for their silver. Nobody knows how many first-year Silver Ikes were lost to the melting pots, but experts estimate that hundreds of thousands of these big coins were lost forever during the frenzied silver rush.

Today, a nationwide explosion in coin collecting has created a huge demand for vintage coins. While collectors have been grabbing everything in sight, Eisenhower Dollars have been overlooked because of their short run. Issued only from 1971-1978, most people have since forgotten about these hefty Ike Dollars - and the fact that a small number of first-year-issue Ikes were struck in silver! Now, while supplies last.