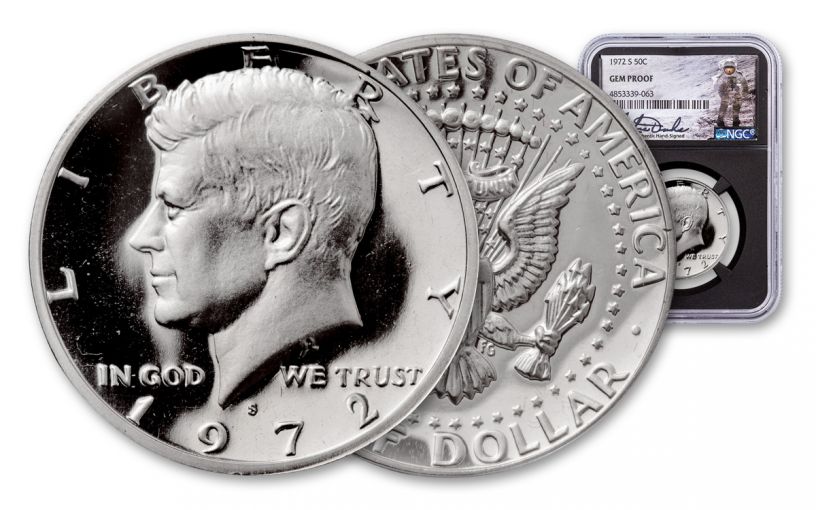 Availability: Out of Stock
This item is currently Out of Stock. Please sign up to be notified if this product becomes available.
Item #
340666
Add to Wish List Add to Wish List Wishlist is for registered customers. Please login or create an account to continue. Add to Compare

Half Dollar Signed by One of Kennedy’s Astronauts!

President Kennedy spoke those words to a large crowd at Rice Stadium in Houston, Texas on September 12, 1962. It echoed his comments made to a joint session of Congress the year before in which he called for the United States to land a man on the moon by the end of the decade. Sadly, Kennedy never saw his call to action fulfilled. An assassin’s bullet may have cut him down, but America prevailed and completed the task JFK had set out before her.

One of the people instrumental in accomplishing this mission was Charles “Charlie” Duke, who served as CAPCOM (Capsule Communicator) for the landmark Apollo 11 mission that enthralled the world during the summer of 1969 by successfully landing a man on the moon. Serving as the central point of communication between Mission Control and the three-man crew, Duke's Texas accent not only helped guide astronauts Neil Armstrong, Michael Collins and Edwin "Buzz" Aldrin as they made their momentous journey to the moon’s surface, but became THE voice of Mission Control as his distinctive southern drawl struck a note with television viewers across the world.

Three years later, Duke made history of his own as a member of the Apollo 16 mission. Not only was he the tenth man in history to set foot on the moon, but at the age of 36, Charles “Charlie” Duke was – and still is – the youngest person to ever walk on the surface of the moon.

With excitement about the 50th anniversary of the first moon landing building by leaps and bounds, anything associated with the historic event has become of intense interest to collectors and science and space travel buffs. Don't miss out on owning this historic coin with a label signed by a true American hero. Blast off for yours today!